I was recently sent an exceptional book to review, I Know Where I’m Going: Katharine Hepburn, A Personal Biography

by Charlotte Chandler. Katharine Hepburn has always fascinated me (more so than most Hollywood stars present or past), so this is a biography that I have truly savored. Many times I find myself re-reading certain passages several times because you can really get the essence of the great and beautiful legend on each page of this outstanding book.

As you can imagine, I read everything I can get my hands on about the Golden Age of Hollywood. Autobiographies, biographies, magazines, memoirs… you name it, I’m on it.

Over the years, I’ve read about some truly remarkable lives.  Many times I’ve closed the book, looked at the face on the cover of the biography (or autobiography) and said, “Your life was more interesting than all of you movies combined.” Nothing, of course, against their movies – it’s just that most of the time, reel life has absolutely nothing on real life.

Katharine Hepburn (even with her incredibly impressive body of work) is no exception.  The lady, herself, is far more fascinating and complex than any character Hollywood could dream up.  The things she does couldn’t be scripted and the words out of her mouth? No dialogue writer in the world could dream up.  I’ve read about some interesting actors, actors, and directors over the years, but most of them cannot hold a candle to Katharine Hepburn.  She is the perfect blend of intelligence, beauty, spirit, determination, talent, vulnerability, and strength.  Many of her best traits contradict one another and that’s what makes her so deliciously fascinating.

Writing book review, or recommending books, is a lot like movie reviews for me. I want so badly to tell you all the reasons you should (even must!) read the book or see the movie.  However, I want you to experience it, just as I did – without knowing what’s coming.  I live in fear of giving anything away that’ll spoil the experience for the next person!

There are so many trying and tragic moments in Katharine Hepburn’s life that are tempting for me to talk about. Moments that would, definitely, make you want to grab a copy of the book and… as they say, “Read All About It!”  But, I’m picking the lock because I want you to have the same, “Oh my!” moments I had while enjoying this book.

Suffice to say, I know where Katharine Hepburn got her strength. She earned it. With some of the things life threw at her, her choices were to let life BREAK her spirit or MAKE her stronger. She chose the latter. Boy did she choose the latter!

The beautiful thing is this: Although life handed this legendary actress and international style and beauty icon several blows, she has always enjoyed life and embraced it as much as anyone I’ve ever read about. The lady loves life frontwards, backwards, upwards, downwards, and inside out!  She approaches life as if it’s a carnival and each day is a joyride.  I honestly believe I connected more with her through reading about her life than any other individual I’ve ever read about.

Katharine Hepburn’s love of her family is something else that stands out to me. Her fierce devotion to them and the fact that she would fight the demons of hell for any of them left quite an impression on me.  The same devotion, loyalty, and love is evident throughout her life with her friends as well.

I have to honestly say that Katharine Hepburn had always been a favorite actress of mine.  With such talent, style, intelligence, and beauty – how could she not be? However, after reading I Know Where I’m Going: Katharine Hepburn, A Personal Biography

Katharine Hepburn is a fascinating, one of a kind, lady and I am just SO hoping you click through one of the links in this post and buy the book.  I want so much for you to meet and get to know this incredible woman.  Her story isn’t just entertaining and getting to know her won’t just make you smile (and often laugh out loud at her spirit and sass!).  Katharine Hepburn’s life is inspiring and even uplifting.  She showed up to Hollywood, and to life in general, and knew who she was and what she wanted to accomplish.  She has always known who she was and defied anyone to imply that wasn’t good enough.

When you look at her pictures, you can see the intelligence, determination, and spirit in her eyes. They tell the story!  I can’t tell you how many times I turned to the cover of the book and was simply awestruck by the perfection of both the title and the picture used on the cover.  The picture captures her beauty, originality, style, intelligence, and strength and the title couldn’t possibly reflect the essence of Katharine Hepburn any more than it does.

I’ll end with one of the most “defining” sections of the book.  There were many, so the choice was difficult. Truth be told, some of the most defining pages were toward the front of the book when Katharine Hepburn talks about her family.

Another favorite passage is toward the end of the book (which, by the way, I HATED to get to – I wanted the book to last forever, I suppose). Katharine Hepburn is discussing “The Creature.”  One of the most incredible things about her is the fact that she beautifully kept her public self and private self separate. She didn’t think of her public image as Katharine Hepburn. She thought of her as, “The Creature.”  Her public image.. the persona… was for the world and she recognized that it was different from the REAL her.  She told the author that she called it “the Creature” and that it should be spelled with a capital C.

In closing, here are a few paragraphs from page 325 of this exceptional book:

When I first visited Kate in her home, I hadn’t seen any pictures of her from the days of her glamorous career. “I don’t keep pictures here in my home of my professional self because those aren’t pictures of me.  Those are photographs of the Creature, and I don’t bring her home.  I don’t allow her in my house.”

In our conversations, she previously had touched on the subject of the Creature, but it was the last time I saw her that she offered her most extensive discussion on the subject.  She said she could do this because she was dismantling the Creature, the Creature having held her in bondage for so long.  Now, she had no more need for her, so the Creature no longer had any power over her.

“I was called Kathy when I was a little girl, and I guess I never grew up or outgrew that little girl.  I feel very much the same inside. It’s how I think of myself, which is quite often.”

“I created the Creature, but I didn’t completely understand her.  Sometimes, she took off on her own.  Ungrateful thing.  She didn’t remember I created her, and I was put in the position of being her psychiatrist or a personal assistant or even a white slave because she knew I was more dependent on her than she was on me.”

“I believed if people knew the person I really am, they wouldn’t have been very interested in me. They might have said, ‘Boring.’ So I had to always think first about the Creature before I thought of myself.”

“I’ll tell you someone I felt sorry for.  That was Marilyn Monroe.  You know why? She let her Creature take over.”

by Charlotte Chandler. It’ll be one of the most fascinating books you’ve ever read.

You’ll never forget it OR the beautiful face gracing the cover. 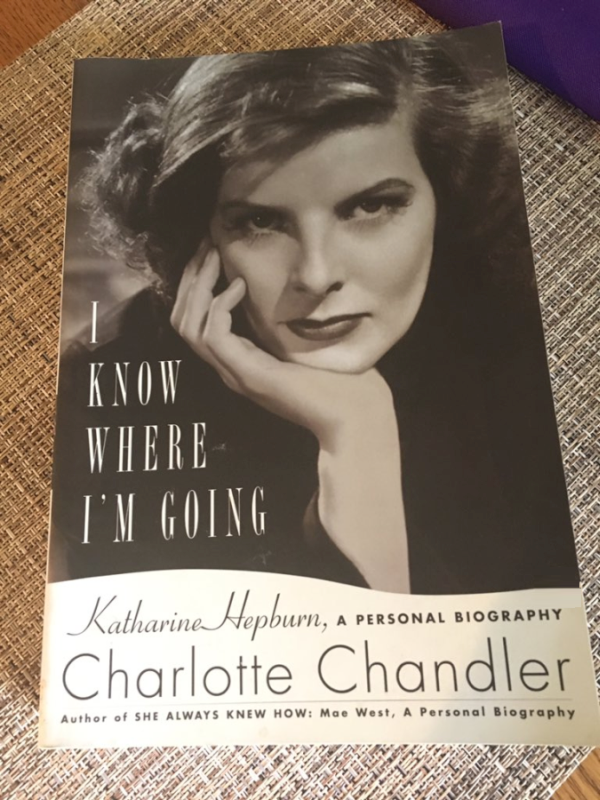