You are here: Home / Archives for Anne Baxter 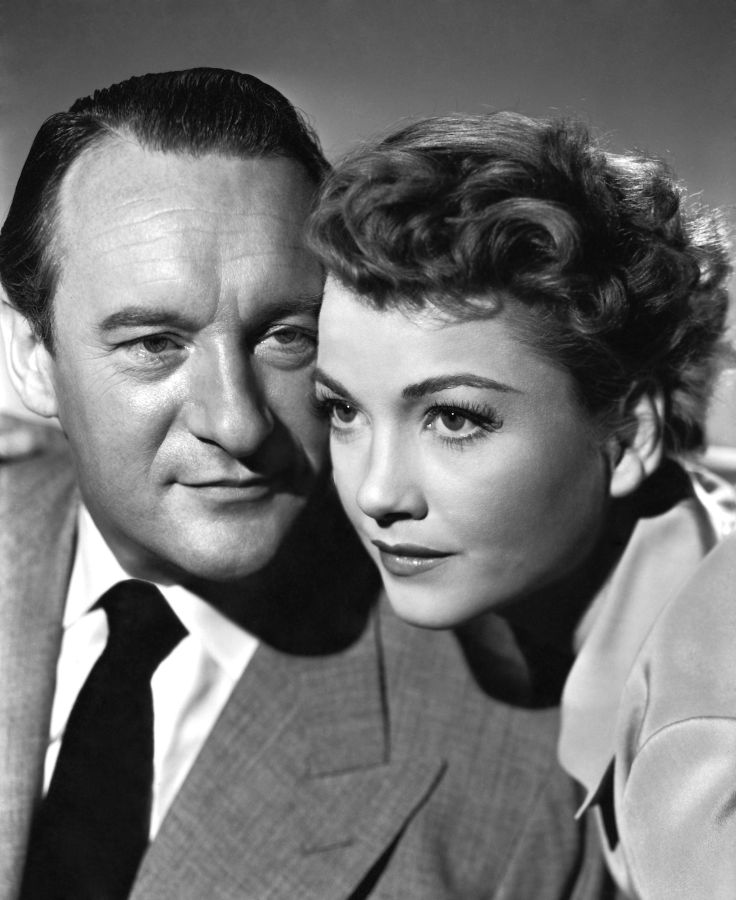 The wonderful 1950 film All About Eve had a cast directors dream of. The director for this particular movie was an all-star, himself… Joseph L. Mankiewicz.

You can find All About Eve (DVD or Blu-Ray on Amazon) on Amazon or watch it on Prime Video (link to the movie on Prime). 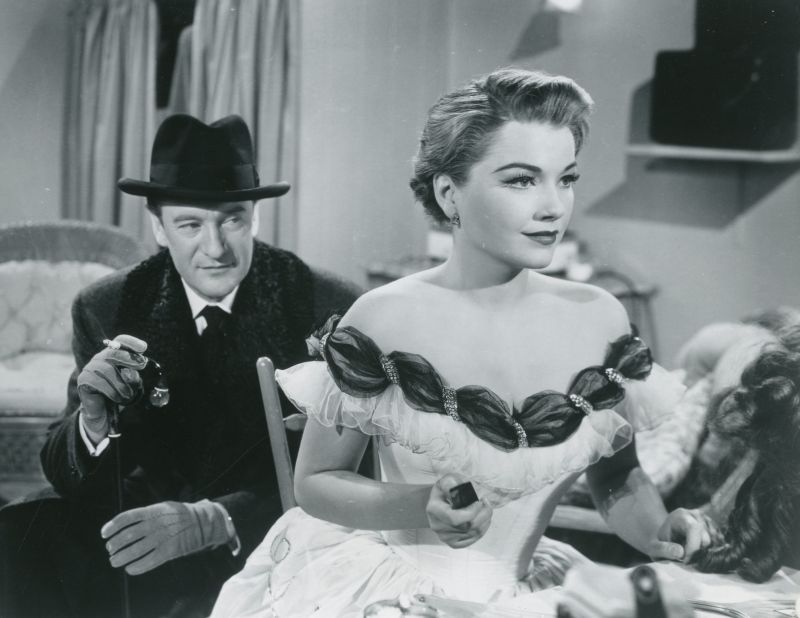 George Sanders and Anne Baxter, All About Eve

I have actually put off writing about one of my favorite actors (George Sanders) for years, now, simply because I did NOT want to come across like I was judging him or making light of anything he did, said, or was involved in. Far, far, far from it. I believe that, like many stars, George Sanders battled his own private demons. He was, as they say, quite a character, but we’d be wrong to quickly judge the man without knowing what he, himself, dealt with on a daily basis.

He has long been one of my favorite actors, even though his body of work is less acclaimed than, say, household-name actors such as Jimmy Stewart, Cary Grant, John Wayne, and Glenn Ford. In fact, if we’re being honest, only those of us who are fairly familiar with old movies can put a face to George Sander’s name or vice versa.

The Golden Age of Hollywood was a very trying time for actors and actresses – even more so than today, in my opinion. The pressure to succeed was intense and each star knew that the success or failure of one film could also mean their own success or failure. What’s more, if someone during that time suffered from mental or emotional illnesses, they did just that SUFFER. Often in silence, for fear of losing roles. Today, help and understanding would be available – but back then, either would have been hard to come by. Trying to cope with a mental or emotional disorder would be about like trying to handle asthma or diabetes without medication.

Can you say impossible?!

I’m not saying, one way or another, that George Sanders suffered from any such issues. I’m one of his biggest fans in the world and even I can admit that he may have just been a bona fide rascal! 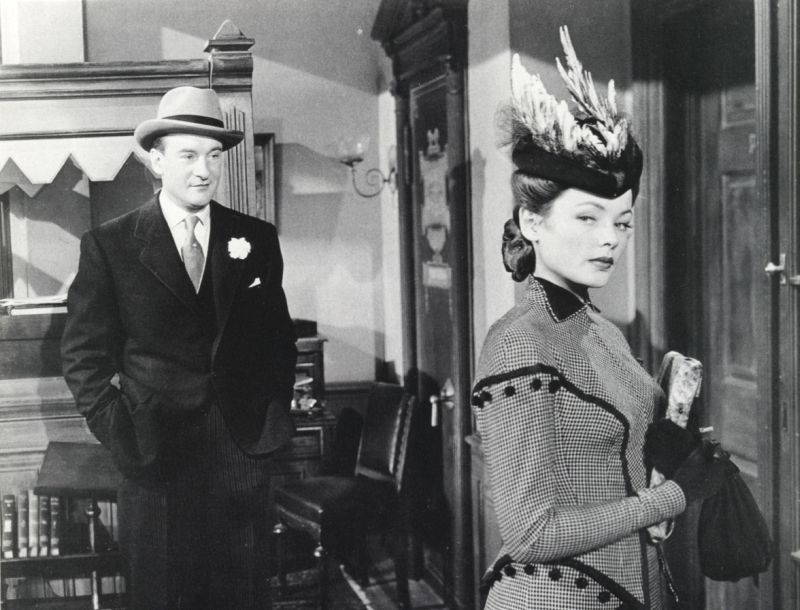 George Sanders and Gene Tierney, The Ghost and Mrs. Muir

George Sanders was born in 1906 to British parents in St. Petersburgh Russia.  His U.S. film debut was in 1936 with Twentieth Century-Fox. He portrayed Lord Everett Stacy in Lloyd’s of London.

During the late 1930s and early 1940s he made a number of movies as Simon Templar (The Saint) and as Gay Lawrence, (The Falcon). If you’ve never seen these fun oldies, try to catch them when you can. They’re just pure old fashioned fun and Sanders ad The Saint is particularly entertaining. His portrayal is very different from the way Vincent Price played The Saint on the classic radio show by the same name. Price’s version was perfect for radio and Sanders’ version was perfect for film.

Like most people, I always remember the first film I ever saw my favorites in. With George Sanders it was as “Robert Fleming” in Lured. His co-star was another of my absolute favorites, Lucille Ball. Their chemistry helped make this an especially wonderful movie. For a movie few have even heard of, Lured is actually one of my favorites… and not just because of the leads! It’s well written and catches you off guard a couple of times.

Rage in Heaven with Robert Montgomery and Ingrid Bergman (talk about a strong cast). This 1941 film is also well-worth finding on dvd (or TCM). It’s one of Robert Montgomery’s best performances, in my opinion. He’s mesmerizing in this film… even if you find yourself wanting someone (anyone!) to just go ahead and choke him.  It isn’t easy for me to say, but Mr. Montgomery is definitely the star of this film – Ingrid and George are pretty much along for the ride.

Other notable movies and roles include…

Confessions of a Nazi Spy (Schlager)

All About Eve (Addison De Witt)

Mr. Freeze on TV’s Batman (1966)
Sanders, very deservedly, won the 1950 Academy Award for Best Supporting Actor for his role in  All About Eve. George Sanders in The Ghost and Mrs Muir

His personal life was nearly as interesting as his movies. His second wife was none other than the beautiful Zsa Zsa Gabor. They were married from 1949-1954. His third wife was actress Benita Hume. They were married from 1959 to her death, from bone cancer, in 1967. His fourth and final marriage was to Magda Gabor. They lasted one year…. and, yes, she was Wife #2’s sister.

From everything I’ve read, Benita was the love of his life and he never fully got over losing her. He lost three loved ones (his mother, his brother Tom Conway, and Benita) in 1967.

Sanders once said that he loathed giving interviews because he did not get paid for them. He also apparently loathed the idea of giving autographs, since it’s something he never did.  He actually seemed to relish in the role of being perceived as a rude, haughty, snobbish, and downright disagreeable person!

In 1937, Sanders told David Niven that he intended to commit suicide when he got older. Tragically, in 1972 he did just that.

He left the following note: “Dear World, I am leaving because I am bored. I feel I have lived long enough. I am leaving you with your worries in this sweet cesspool. Good luck.”

So. There you have it. While some may argue that he had simply created a persona, I’d have to disagree – and quickly, at that. He was simply a bit of a cad and there’s no need to try to hide it. It takes all kinds in life and it’s futile to try to make someone into something we want them to be.

I’m much more comfortable with accepting them for what they are or were – celebrating the good and accepting the bad, neither glossing over it or hovering over it. I prefer to celebrate all that he brought to his movies and his roles.

Before closing with a few of his “genuinely George” quotes, I want to encourage you to see all of this talented actor’s movies – especially Lured, Rebecca, The Ghost and Mrs. Muir, Rage in Heaven, Lured, The Son of Monte Cristo, and all of the “Saint” and “Falcon” movies.

Just be sure to only expect “fun” with the Saint and Falcon movies. They aren’t very deep, to be sure… but FUN? They absolutely are that!

I don’t ask questions. I just take their money and use it for things that really interest me.

I was beastly but never coarse. A high-class sort of heel.

Where on the screen I am invariably a son-of-a-bitch, in life I am a dear, dear boy.

(When asked how he felt after his divorce from Zsa Zsa Gabor) Like a squeezed lemon.

On July 3, 1906, the world was at peace. Nothing of any consequence seemed to be happening in the capital cities of any of its countries. Nothing disturbed the summer lethargy of its population. Everywhere, people dozed contentedly, unaware that an event of major importance was taking place in St. Petersburg, Russia. At Number 6, Petroffski Ostroff, to Margaret and Henry Sanders, a son of dazzling beauty and infinite charm was being born. It was I.