You are here: Home / Archives for Douglas Fairbanks Jr 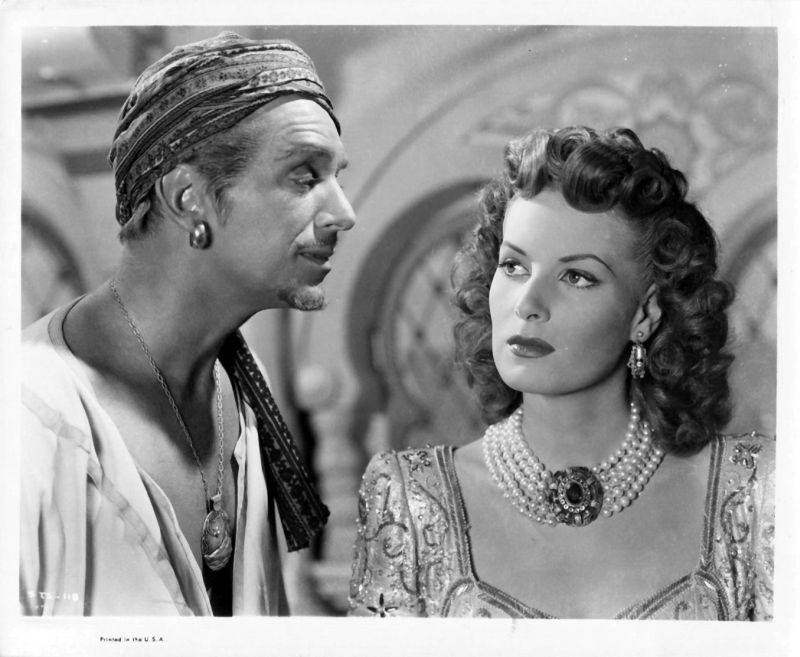 August 17 is Maureen O’Hara’s date of birth, meaning it’s kind of a holiday in my little world. I have always LOVED the fact that two of my absolute favorites, Maureen O’Hara and Lucille Ball, share my birth month. Truth be told, it makes me kind of giddy.

I love that TCM is devoting Maureen’s birthday to an entire day for her and her films. I’ve always loved their Summer Under the Stars each summer and I love it even more when my favorites have their own days. 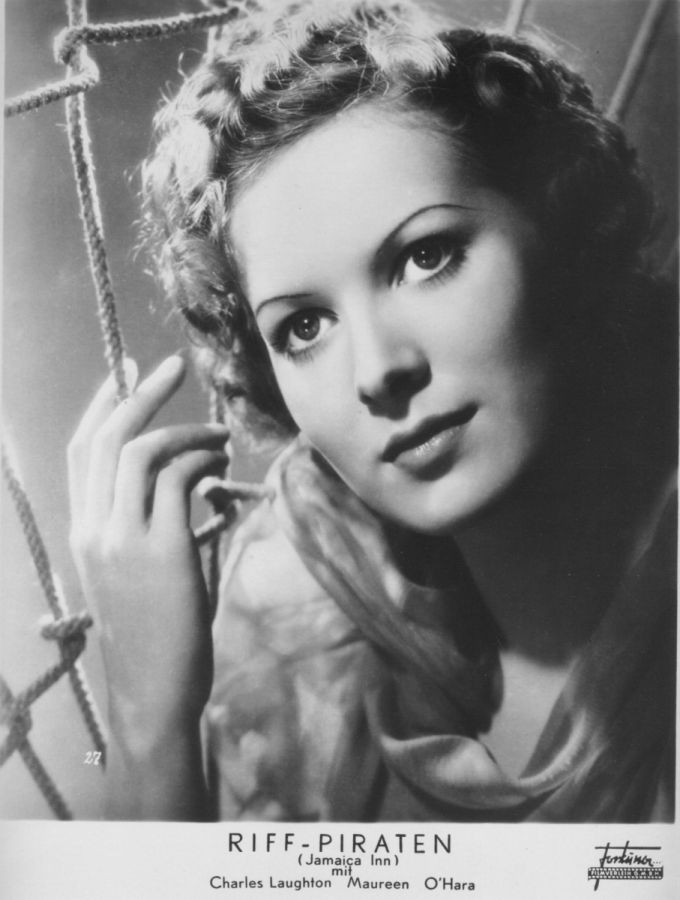 Below, in order, are the movies that will be shown (check your local listings for the time):

Jamaica Inn (1939, directed by Alfred Hitchcock). The movie co-stars Charles Laughton. It marked Maureen’s film debut. She was so incredibly young in this film… with the face of an Irish angel.

A Woman’s Secret (1949, directed by Nicholas Ray). I love this film noir, mystery so much. It co-stars one of my favorite actors, Melvyn Douglas and another of my favorite actresses, Gloria Grahame. Rounding out the cast and doing it in scene-stealing fashion are Mary Philips and J.C. Flippen. Neither could possibly be any funner to watch than they are in this one.

The Fallen Sparrow (1943, directed by Richard Wallace). I’m so glad TCM is showing this VERY rarely shown drama… it’s a good one! Maureen’s co-stars are John Garfield, Walter Slezak, Patricia Morison, and Martha O’Driscoll. I hope you’ll take the opportunity to catch this one – it isn’t shown on television often.

The Rare Breed (1966, directed by Victor McLaglen). The Westerns Maureen made with John Wayne get all of the attention, but she made other outstanding Westerns without the Duke. The Rare Breed stars one of my favorite actors, James Stewart. Although he and Maureen lead the cast, the movie is all but stolen by Brian Keith (in a particularly entertaining role!) and Juliet Mills. They’re all wonderful in their roles, but Brian Keith and Juliet Mills are honestly why this movie works. They bring charm and humor and its palpable.

Sinbad the Sailor (1957, directed by Richard Wallace). I can’t tell you how much I love the fact that TCM is airing these two technicolor beauties back to back. The more swashbuckling the better! Sinbad the Sailor has surprising little actual fighting…. very, very little in fact. However, the charisma of Douglas Fairbanks Jr, the beauty and sass of Maureen O’Hara, and the great humor of Walter Slezak make it an entertaining film in spite of little actual swashbuckling.

The Wings of Eagles (1957, directed by John Ford) With everything they meant to her, personally, and to her career, I am so very, very thankful that TCM is airing one of her films with John Ford and John Wayne. When I first saw the lineup, I was disappointed that The Quiet Man (one of the greatest films of all time) wasn’t included – but then I realized, it’s shown frequently on television. Her day is a special time to show movies that are harder to catch. This outstanding movie is a great one to represent the trio. The biographical drama also stars Ward Bond, Dan Dailey, and Ken Curtis (Festus from Gunsmoke!)

The Hunchback of Notre Dame (1939, directed by William Dieterle) Maureen O’Hara and the wonderful Charles Laughton are teamed again for this masterpiece. If you are an avid old movie fan, you have probably seen this one before. I encourage you to watch it again – if only to marvel at the talent of Charles Laughton. The man was phenomenal and his performance in this film leaves me speechless.

Miracle on 34th Street (1947, directed by George Seaton, who was also one of the writers) I was pleasantly surprised that this one made the lineup! I love the thought of people who have never seen this excellent classic getting a chance to watch it. It is movie magic, plain and simple. The film co-stars John Payne, Natalie Wood, Edmund Gwenn, William Frawley, and Gene Lockhart.

This Land is Mine (1943, directed by Jean Renoir) Yet again Charles Laughton and Maureen O’Hara team up in a wonderful drama and, truth be told, he is every bit as mesmerizing in this role as in his  role as Quasimodo. The movie also stars George Sanders and Walter Slezak (he made quite a few movies with Maureen!).

Spencer’s Mountain (1963, directed by Delmer Daves) Maureen O’Hara has starred with my absolute favorite actors – James Stewart, Melvyn Douglas, Douglas Fairbanks, Jr – and here she’s teamed with yet another one… the wonderful Henry Fonda. They’re perfect together in this outstanding movie. The film also stars James MacArthur and Virginia Gregg. 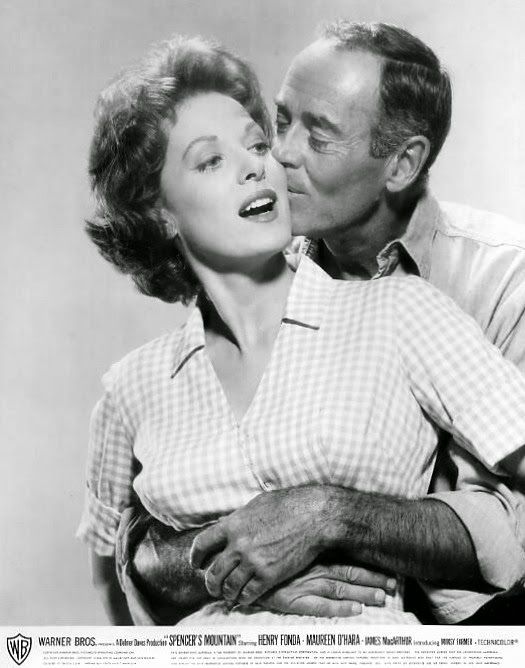 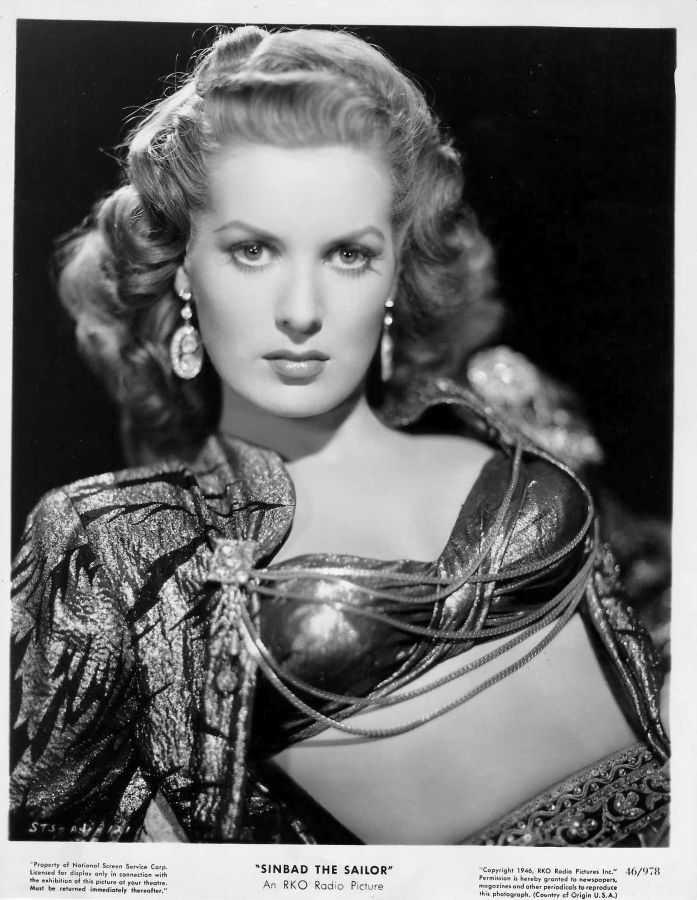 Sinbad the Sailor, while it lacks the action of other swashbuckling films (including two of my favorites, The Spanish Main and The Black Swan), is a ridiculously entertaining and colorful movie. Four of the reasons are Maureen O’Hara, Douglas Fairbanks, Jr., Walter Slezak, and Anthony Quinn. This is a perfect example of a film pretty much being carried by a very capable and well above average cast.

You can find Sinbad the Sailor (link to the dvd on Amazon ) on Amazon or watch it on Prime. 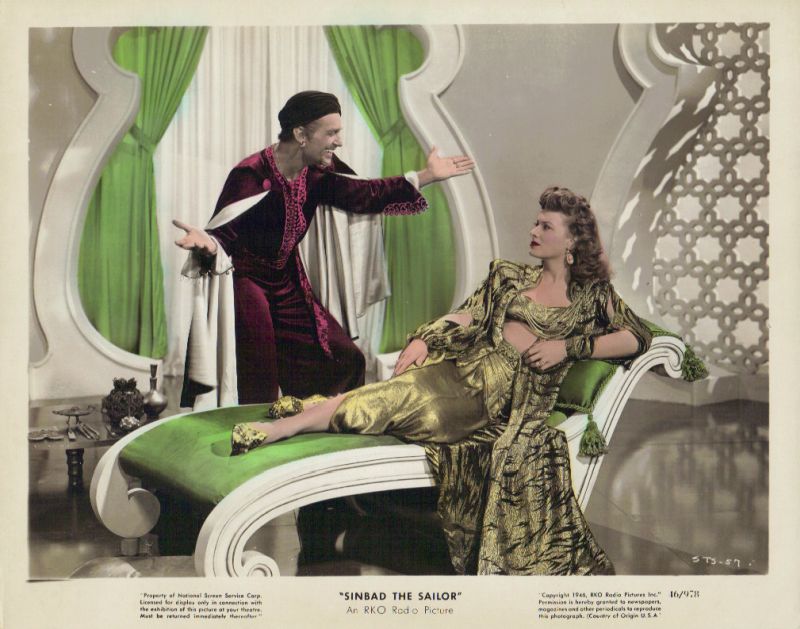 I have an obsession with lobby cards and movie posters that defies description – I love them with everything I’ve got. The Sinbad the Sailor Lobby Card pictured above is especially beautiful, isn’t it? 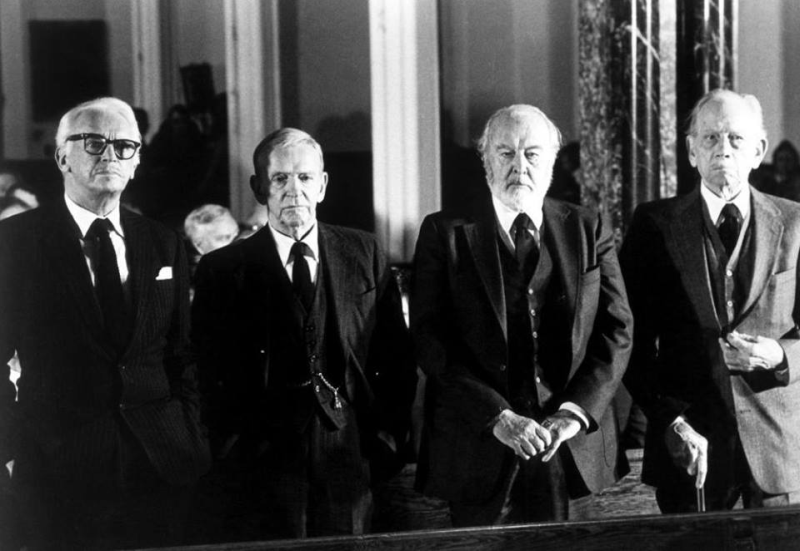 Talk about an ICONIC photo! These four men aren’t just legends, they’re four of the greatest actors of our (or any) time. This is from the wonderful 1981 film Ghost Story. It would mark the last theatrical feature film for Melvyn Douglas, Fred Astaire, and Douglas Fairbanks Jr.. I am, and forever will be, amazed and thankful that these men were teamed for a film.

Melvyn Douglas and Douglas Fairbanks, Jr. are two of the stars I “collect” – as in all of their films, articles, etc… but this particular film, oddly enough, is proving to be difficult for me to find! I’m accustomed (as an avid collector of my favorites) to struggling to find some older films, but this one is from 1981, it should be easy peasy.

IF you can ever get your hands on it, or find it on TV (also often difficult), be sure to watch it. It’s a darn good movie, wonderful plot… and the cast?? CAN’T BE BEAT!