You are here: Home / Archives for Michele Carey 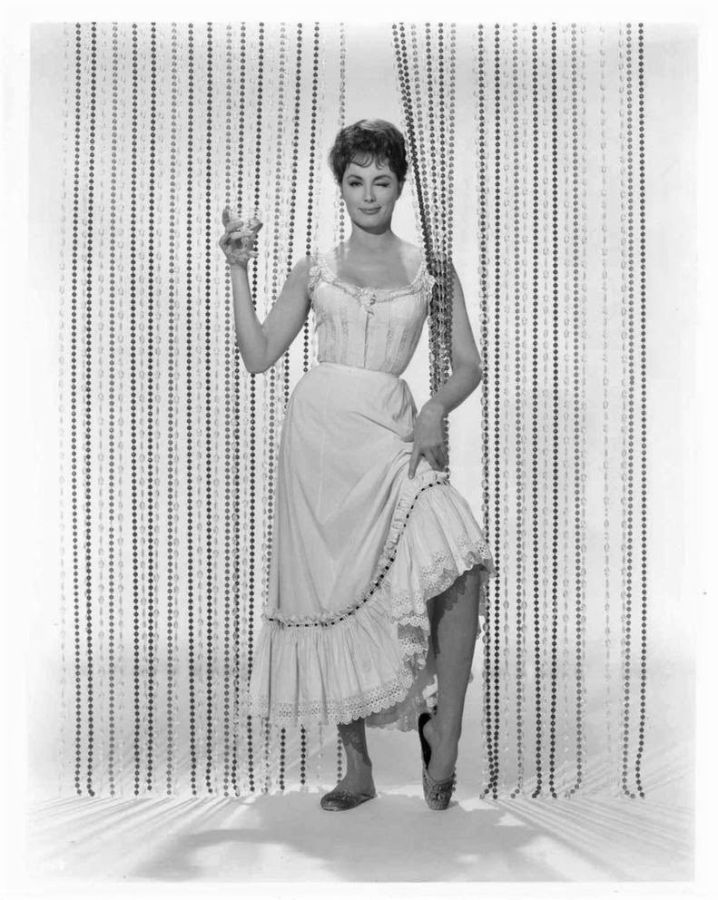 A movie is only as good as it’s stars and the characters they play, which is why El Dorado is movie gold. The colorful, larger than life characters this cast gives us is a gift that keeps on giving. I honestly believe I fall more in love with this movie each time I see it. The same is true of another Howard Hawks and John Wayne western, Rio Bravo. 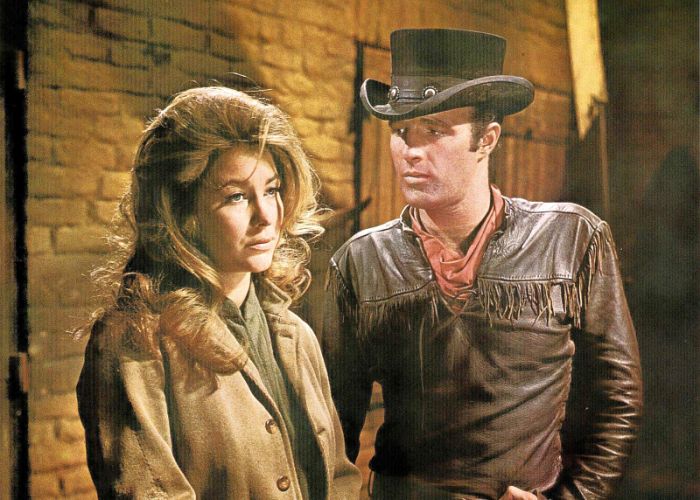 The two lead stars in this western (John Wayne and Robert Mitchum) are excellent as always. There is something so right about watching a John Wayne Western and it’s made even more magical when the stars around him were/are just as larger than life and colorful as he was. In El Dorado, the Duke is surrounded by such stars!

Robert Mitchum and Arthur Hunnicutt go with John Wayne as beautifully as Dean Martin and Walter Brennan do in Rio Bravo. When they’re on the screen together, you’re pretty sure they were born for the moment. 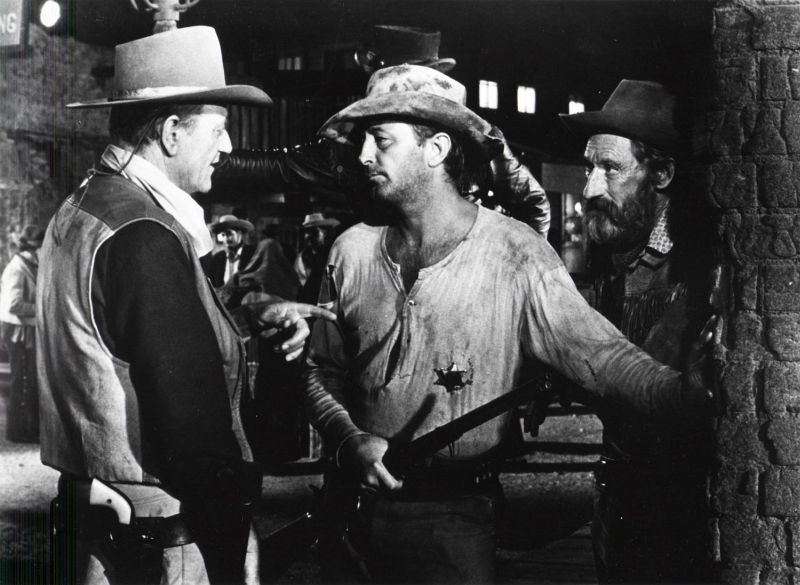 When it comes to supporting stars, El Dorado also has an embarrassment of riches: James Caan, Arthur Hunnicutt, Ed Asner, Christopher George, Michele Carey, and Charlene Holt do exactly what a supporting cast should do.

They simply make the film even better.

James Caan could just as easily be considered a lead star in this film (he gives my favorite performance in the film), he is usually treated as a supporting star… you couldn’t ask for any more support than he gives! The same is true of Arthur Hunnicutt, Christopher George, Ed Asner, and Charlene Holt. This movie wouldn’t be as timeless and perfect without this group of talent. 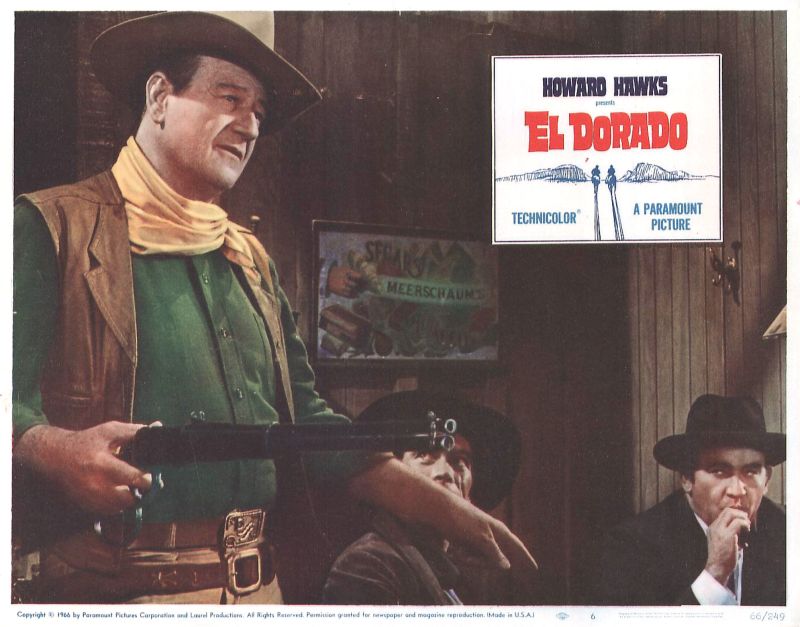 There’s really nothing quite like kicking back and enjoying a great Western, is there? While growing up, I loved to watch Westerns with my dad and now (more than a few years later), I love to watch them with my husband and/or cats.

We capped off a wonderful Christmas this year by watching back to back John Wayne movies on AMC. While I love that television stations show classic movies, I was reminded of the beauty of movies on dvd…. no commercials! I will say this, though, at least commercials give you ample time to make runs to the kitchen.

is just a outstanding Western and a deliciously classic John Wayne movie. How fun is it to escape into a Western setting, complete with dust, guns, lovely ladies, and brave heroes?! Throw in leading men like John Wayne, Robert Mitchum, and James Caan and you’ll never want to leave.

John Wayne plays hired gunman Cole Thornton.  Cole turns down a job with Bart Jason (Ed Asner – so unusual seeing Mary’s boss in a villainous role!) because it would mean fighting an old sheriff friend, J.P. Harrah (Mitchum).   When he learns that a famous gunfighter is on his way to help Jason, and that his friend is now drinking heavily, Cole realizes that the good sheriff needs his help.

His only help is a new “kid” he has befriended called “Mississippi” (Caan).  Mississippi is crazy good with a knife, but needs Cole’s coaching to handle a gun.

To me, a great character actor means that – after watching the movie – you simply can not imagine the movie without him or her.  Arthur Hunnicutt pulled off greatness with El Dorado. In fact, even if the movie hadn’t been wonderful (which it was), it would be worth watching the movie for him alone.

Now for the ladies.  Maybe it’s because I’m a female, myself, but one of the things I’m most fascinated with when it comes to movies is the actresses.  I love everything about them.  The hairstyles, the performances, the “chemistry” they have with the actors, the clothes, etc, etc.  In fact, many times when my husband will ask me to choose which Elvis, John Wayne, or James Bond movie from his collections we’ll watch, I’ll mentally take stock of the actresses in each –  Nancy Sinatra? Halle Berry? Mary Ann Mobley?

The lead actresses in El Dorado were Charlene Holt (Maudie) and Michele Carey (Josephine “Joey” MacDonald).  These aren’t exactly household names, which bumfuzzles me. They were both as beautiful and talented as any actress of their time (or any time for that matter) – many of whom ARE household names.

Charlene Holt (1928 – 1996) was a brunette beauty with a decidedly exotic face. The combination, no doubt, helped her win “Miss Maryland” in 1956 .  She played opposite The Duke in El Dorado and more than held her own. I wish she had been given more to do in El Dorado but I look forward to rounding up and watching the rest of her movies.   Sadly, this won’t take long as there aren’t many.  What’s more, quite a few of these movies list her as “uncredited.”

Holt appeared in several TV commercials in 1958 and reportedly signed a $50,000-a-year model contract in New York at age 19.   Apparently she was spotted in a Revlon lipstick commercial by director Howard Hawks who then cast her in several of his films, including El Dorado.

Michele Carey played spirited, though at times misguided, Josephine in El Dorado. Overall, the character of “Joey” wasn’t quite as likable (or grounded) as Maudie (Holt).  However, the viewer can’t help but be struck by Carey’s beauty and screen presence.  She was a Jennifer Aniston type before there was a Jennifer Aniston.

I’ve seen SO many movies, and watch old and new movies so often, that I always recognize a face before I’m able to place where I’ve seen it.   It can be a pain in the neck sometimes – as well as a strain on the brain. I’ll see an actor or actress and KNOW I’ve seen them in something else. Sometimes it isn’t until after the movie’s over that I realize where it was.  I knew I’d seen Michele Carey’s adorable face before – but it wasn’t until the next day that I realized it had been in an Elvis movie.  She was Elvis’ leading lady, Bernice, in Live a Little, Love a Little.

During El Dorado, each time Michele Carey was on the screen, I kept trying to come up with where I’d seen her before.  For some reason, I kept associating her with a dog.  I also knew that what’d I’d seen her in before was a comedy.  Finally, the next day it hit me – she was Bernice in Live a Little, Love a Little and the dog in question was Albert.

I also recognized Christopher George’s face (he played the “famous gunfighter” and The Duke’s main rival). He’d been on an episode of Bewitched… as a warlock no less!   I loved him in El Dorado. He played a dirt bag with real style.  If you’re going to be a dirt back, by all means be stylish about it.

The cast of El Dorado was nothing short of perfection.  Great cast, a memorable sidekick (Bull), and a lot of fun make El Dorado a movie you’ll want to see.

on Amazon today – that way you’ll never have to sit through a gazillion and one commercials.  The Duke will be just an arm’s reach away whenever you need him. 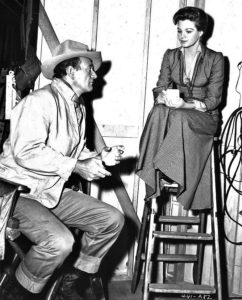