You are here: Home / June Allyson / One of the Best Old Hollywood Biographies I’ve EVER Read: June Allyson’s Autobiography 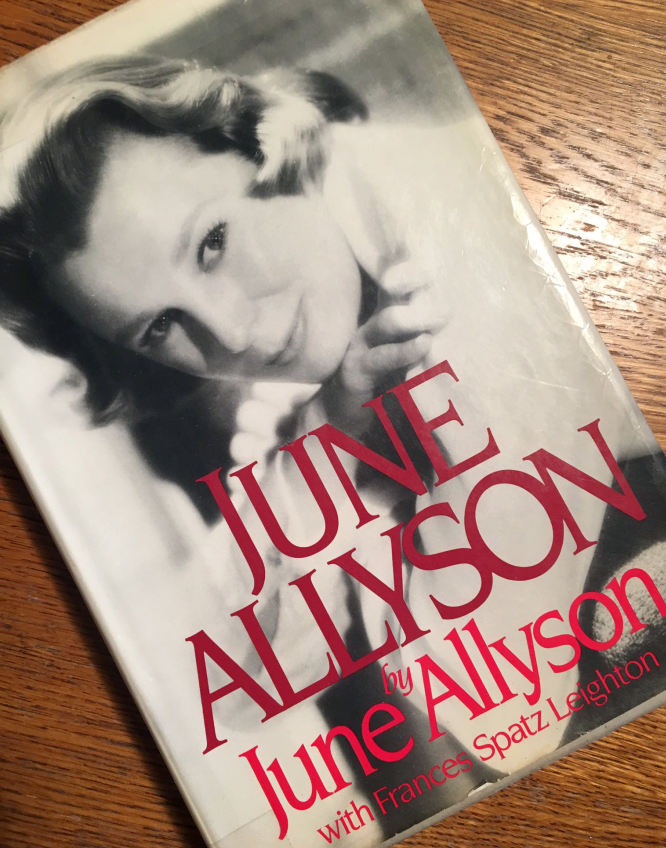 My husband has a passion for BBQ that is, in my opinion, completely unrivaled. The man can smell a BBQ restaurant three miles away – when he locates one, we either visit it right away or, if we’ve recently eaten, he instantly make plans for when we WILL be back.

Sometimes he even tells it, on the way by, that we’ll be back.

When he has a plate of BBQ in front of him, it’s quite the production. JUST the right amount of sauce is added (after first tasting it to see how much will be required), the perfect amount of onions and perfect number of pickles are invited to the party, the napkin placed in his lap and… he dives in without a care in the world. It’s one of his greatest passions and seeing him “BBQ happy” makes me happy.

This is very much how I am with cats, chocolate, strawberry sundaes, fried catfish, old movies, classic tv and radio, and old Hollywood biographies/autobiographies. Fortunately, for cats, I only eat three of these passions.

As I’ve often said in my Hollywood Yesterday Book Reviews, I am always, always, always in the middle of at least 3 books at any given time. I can’t help myself, I just love them that much.

I recently read one that is, now, officially one of my all-time favorites: June Allyson by June Allyson.

First, a few words about how I feel about June Allyson. She’s my Doris Day. Is that a strange thing to say? Well, stick with me, kid, you’ll get used to it. I say a lot of strange things – sometimes within one sentence.

Doris Day is sunshine, personified to many people. Perhaps they were going through a rough patch in their life when they saw her in a movie and her rays of sunshine broke through their clouds. Or, maybe they didn’t have any dark clouds to break through – maybe she simply caused the sun to seem brighter.

I have nothing against the wonderful Doris Day, mind you – but June Allyson is MY personal Doris Day.

Except she’s my June Allyson.

I warned you about me. 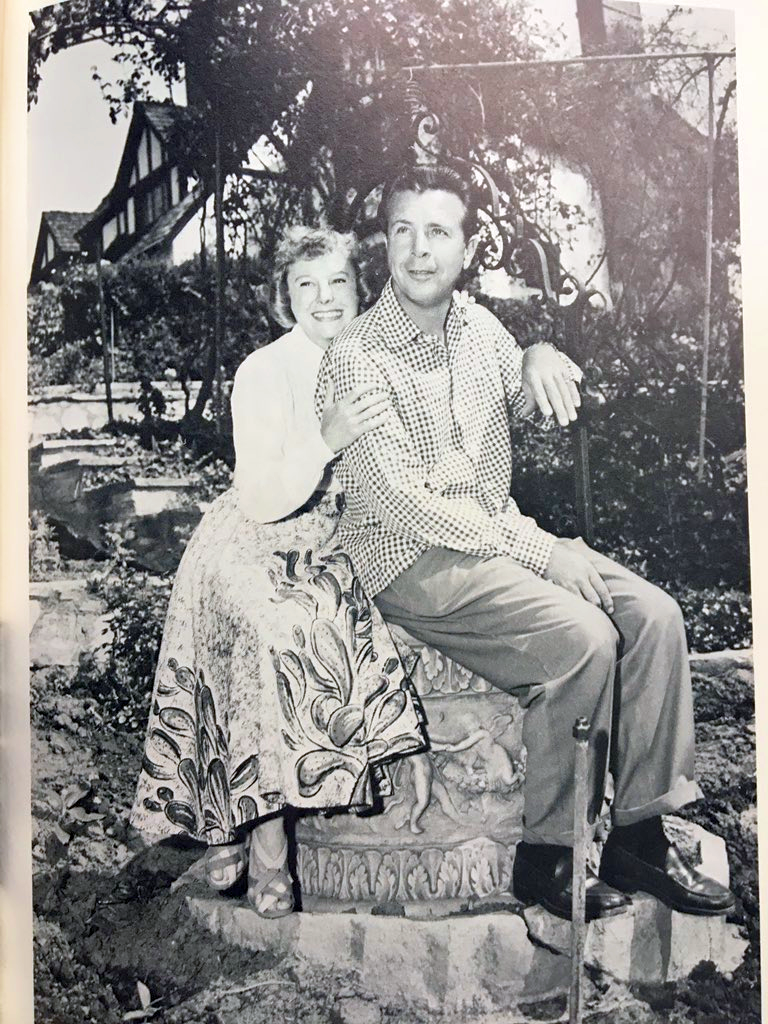 My parents both died far too young. My dad was just in his 50s (after a long illness) and my mom was in her early 60s (complications from diabetes and heart disease – both of which are monsters). June Allyson movies were like medication on both occasions.

Recently, one of my beautiful daughters had a high-risk pregnancy that had this mother hen beside herself. I can’t even begin to tell you how many June Allyson movies I watched!

Naturally, I watch June Allyson even when my world isn’t turned upside down. I just adore her and everything about her. Whether she brings Van Johnson or Dick Powell with her into my den, it doesn’t matter -she is always, always, always welcome.

Her wonderful autobiography, June Allyson is as sunny, honest, and unpretentious as she was. It was an absolute joy to read every single step of the way.

In fact, I did something after finishing this one that I have never done before. Instead of placing her on one of my Old Hollywood book shelves, I turned back to page one so I could enjoy the journey through her life one more time.

I say “one more” but there will be other journeys – and plenty of them.

June Allyson pours her heart out in this poignant autobiography. She takes us inside her early days in Hollywood with wonderful stories about Mickey Rooney, Van Johnson, and her very close friend Judy Garland. As is the case with all exceptional memoirs, you meet household names along the way and, in this case, you get to enjoy their presence as well as June’s adorable instances of being starstruck.

Reading about the movie “The Conqueror” (the deaths of John Wayne, Dick Powell, Susan Hayward, Pedro Armendariz, and Agnes Moorehead have all been tied to the making of this film) was unsettling and interesting at the same time.

Most compelling (for me, anyway) was the love story between her and Dick Powell. Their marriage lasted 17 years – until his death. When she lost her soulmate, she had a horrifying downward spiral – understandably. Her book tells how her friends helped her find her way out of the devastating darkness.

While you journey through the valleys and mountaintops with this wonderful lady, you can’t help but be awestruck how she survived it all. One of the things I love most is that it all ends on a mountaintop with her husband Dr. David Ashrow. It may sound like a Hallmark greeting card but there’s only one way to put it: He helped her find happiness again.

As I often say, one of my greatest and perhaps guiltiest pleasures with autobiographies and memoirs is hearing about the other stars. When an actor or actress tells about their experiences with fellow stars, you learn a lot about the stars they are referring to as well as the one doing the reminiscing. Katharine Hepburn, June Allyson, and Fred Astaire are three that come immediately to mind when thinking about stars who were kind to other stars.

There are one or two stars who June Allyson doesn’t shine an especially favorable light on, but it isn’t, shall we say, an unflattering light we didn’t already know about!

Overall, she is extremely positive about everyone she knew along the way and I love that about her.

I can’t say enough wonderful things about June Allyson (the book or the actress!). Every word is a delight – whether it makes you feel warm, happy, shocked (two words: Alan Ladd), or sad. You’ll laugh out loud in places and probably swipe at a few tears in others (I certainly did).  You’ll come to love stars you already loved even more (for me: Judy Garland, Lucille Ball, James Stewart, Rita Hayworth, Van Johnson, Ronald Reagan, Susan Hayward, John Wayne) and you’ll become a fan of stars you didn’t know much about before but want desperately to know them better now (for me: Alan Ladd, Alan Ladd, Alan Ladd, and Alan Ladd).

You’ll also find that some of your favorite stars were as complex and multi-layered as you always suspected (for me: Joan Crawford, Joan Blondell). I love that June doesn’t attempt to judge anyone – she knows something I always preach: Everyone fights their own battles in their own ways. Period.

In addition to the wonderful writing and priceless memories and stories, the pictures in this book are extra wonderful. I have been a huge fan of June Allyson and Dick Powell for years and there were many pictures I have never seen.

Read more about June Allyson by June Allyson on Amazon. As for me, I’m going to kick back and read another chapter right now. Yes, for the second time. What can I say… she’s my Doris Day. 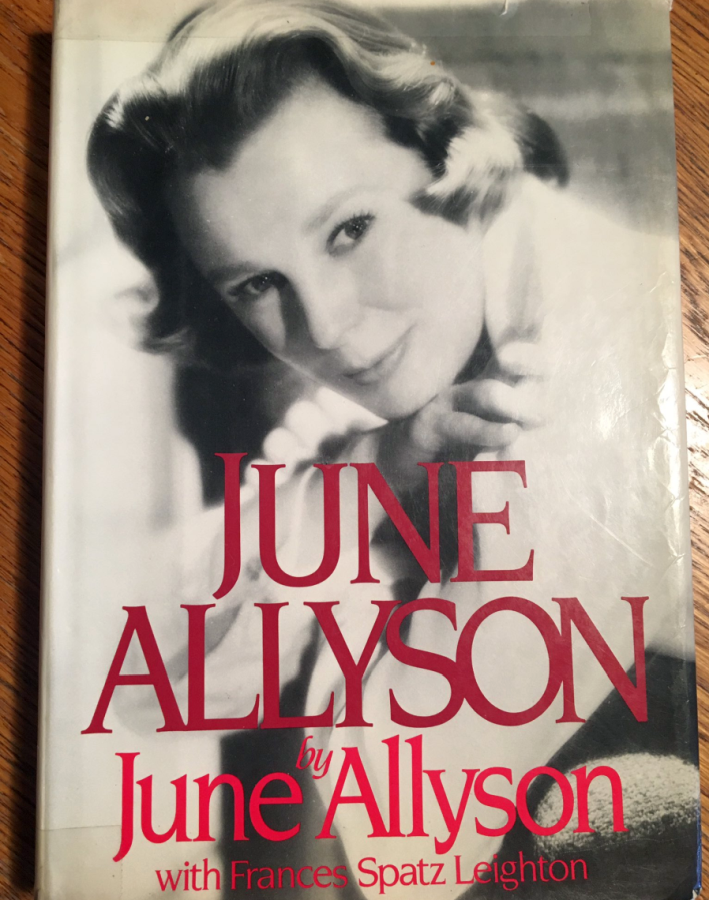