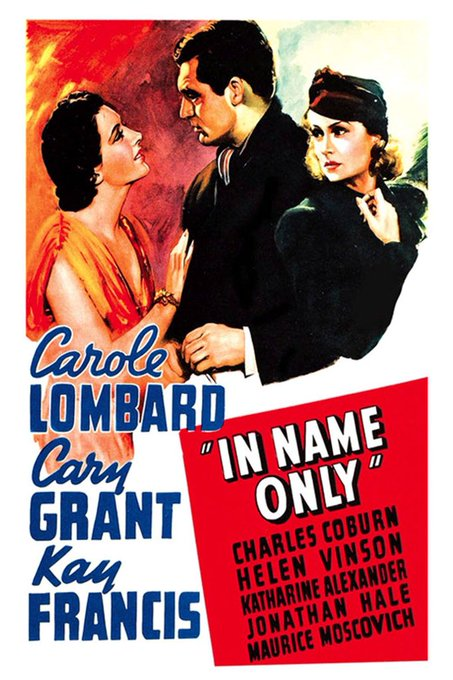 I have a confession to make – I have always watched movies based upon who is in them. For example, if one of my favorite actresses or actors is in a film, I will pop the popcorn, pour the raspberry tea, round up my cats and head for the den. I will plop in my favorite chair and escape with said favorite or favorites.

The great news is I have a lot of favorites, so I eat a lot of popcorn. However, there have (over the years) been a lot of wonderful gems I’ve come across simply because they were on when I needed a movie to watch – whether a favorite stars in it or not!

This was the case, recently with In Name Only. Don’t get me wrong, I have VERY MUCH liked Cary Grant and Carole Lombard for some time, now- they simply hadn’t reached the same “absolute favorite” rarefied air of, say Lucille Ball, Katharine Hepburn, Humphrey Bogart, Maureen O’Hara, Buster Keaton, James Stewart, Audrey Hepburn, Rita Hayworth, Barbara Stanwyck, Joan Crawford, Ava Gardner, John Wayne, Robert Montgomery, Clark Gable, Marion Daviess… the stars I make time in my schedule for – even if it’s a movie I’ve seen a million and thirteen times…. looking at you, Sabrina and The Quiet Man.

Funny thing is, though, I often “meet” new favorites who ascend to the rarefied air this very way. Cary Grant and Carole Lombard just landed themselves smack in the middle of the aforementioned favorites and I’m now on a mission to see their complete filmographies.

In Name Only is a movie that had never been on my radar – as in, AT ALL. When I saw that it was on TCM recently, I actually had to look to see who starred in it! See? Completely OFF my radar. I’ve recently become a big fan of Cary Grant and needed to see Carole Lombard in something else (I’d only seen her in three), so… you guessed it.. popcorn was popped while the raspberry tea was being poured.

It didn’t take long for this fun and engaging movie to pull me in. Carole Lombard, even without the wonderful assistance from Cary Grant and a solid cast, has a way of luring you in. There’s a certain vulnerability about her that makes you want to enter into her world and help her fight her fights and clear the path to happiness for her.

Cary Grant is Alec Walker who is in a horrible marriage to gold digger, nasty Maida (played sublimely by Kay Francis). Alec meets and falls for beautiful widow (and mother) Julie Eden, played perfectly by Carole Lombard. Even though the nasty wife certainly doesn’t love him, she refuses to give him a divorce. Far too much money involved for that!

The movie then takes you on a roller coaster ride as you hope Maida gets her comeuppance as much as you hope Alec and Julie get their happy ever after.

I am not about to give anything away, but I do want to say this is a roller coaster ride of emotion… and one I enjoyed completely.

Find In Name Only on Amazon – it’s truly a hidden gem.