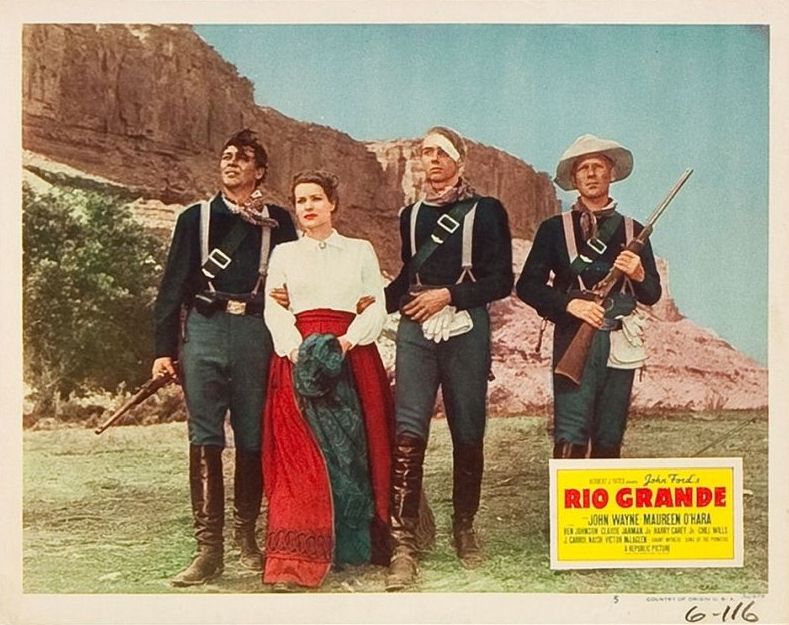 I have a confession to make and I don’t mind one iota making it – I am obsessed with Westerns. I had just as soon be watching a Western as doing just about any other activity (not counting, of course, any time spent with family – they come first EVEN before Westerns!). And if it happens to be a John Wayne Western, all the better!

Rio Bravo is one of my favorite Westerns – John Wayne or otherwise.

Plot John Wayne plays a cavalry officer posted on the Rio Grande. His  son, played to perfection by Claude Jarman Jr. happens to be a recruit who seems absolutely determined to prove himself – no matter how many risks he has to take to do so. My much-adored Maureen O’Hara plays his strong, beautiful wife from whom he has been separated for many years.

This 1950 film was directed by one of the greatest directors of all time, John Ford. Ford directed John Wayne in quite a few of his films, as well as Maureen O’Hara.

In addition to the three stars named above, the movie also stars Ben Johnson, Chill Wills, Harry Carey Jr., Patrick Wayne (in his film debut), and Victor McLaglen, in my favorite of all of his roles. He proves his incredible talent for comedy with this role and brings a great degree of lightness to a film that could be, otherwise, pretty heavy.