You are here: Home / Archives for Modern Times

Modern Times – written and directed by Charlie Chaplin – is one of the cutest, most entertaining silent films ever made, in my opinion. The film stars the great Charlie Chaplin and the equally wonderful Paulette Goddard.

You know a film is extra special when even an unplanned moment shows up in the final scene’s screenshot.  The photo above is beautiful for many reasons – it’s, frankly, just a gorgeous shot. For those of us who watch and love Charlie Chaplin, we see it as “vintage Chaplin.” He had an eye for the grand scheme of things and the beauty of this shot and moment is just what one comes to expect from the genius.
I love the way they’re walking off – side by side into the wide open world, a world of possibilities, adventures, and hope. I love how he is there, in all of his adorable Tramp splendor, with a trusting and lovely lady by his side. I love the contrast of their hats and that his crazy shoes are pointing in opposite directions!
There’s something extra special if you look closely enough (something I excel at – I swear, I stare at and mentally dissect every old Hollywood photo in existence!). See the shadow on the ground of the Little Tramp’s bag?
The shape of a heart.
When loveliness happens by happenstance, you know you’re into something magical
If you’ve never seen Modern Times, I hope you’ll make a point of seeing it soon. These two stars are outstanding and downright delightful in every way – especially together. You can order the Modern Times (Amazon link) dvd on Amazon or watch it now on Prime Video. 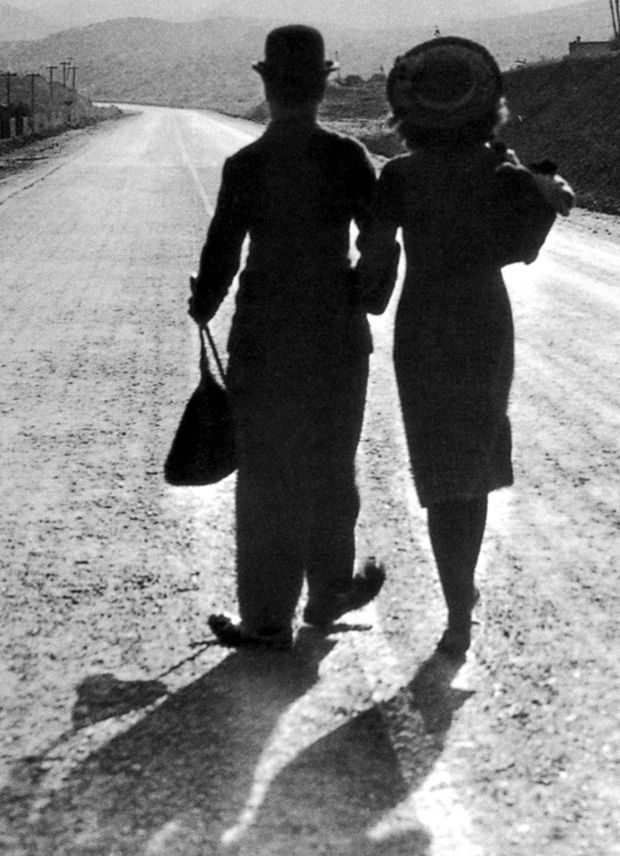