You are here: Home / Archives for Sidney Poitier 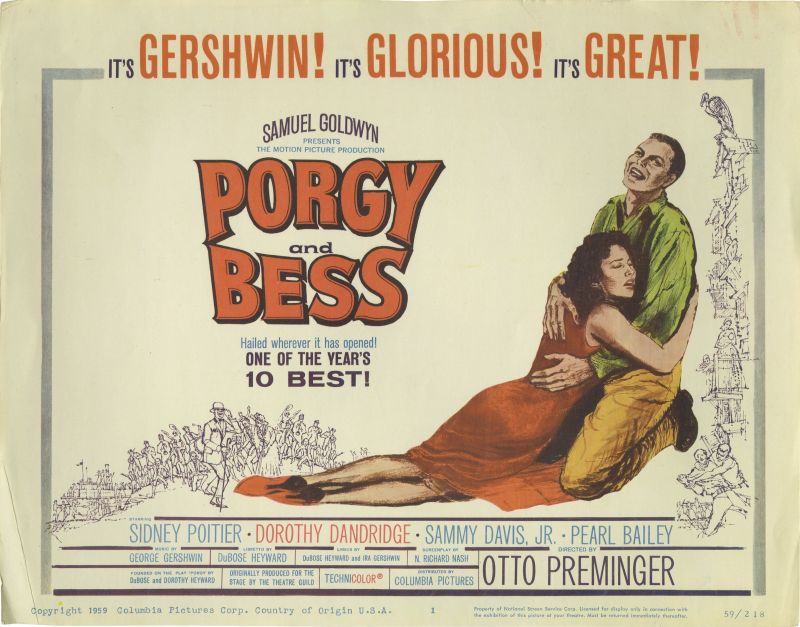 There are All Star casts, then there are ALL STAR casts!  Porgy and Bess (1959) certainly had the latter: Dorothy Dandridge, Sidney Poitier, Sammy Davis Jr, Pearl Bailey, Brock Peters, and Claude Akins.
(Continued below) 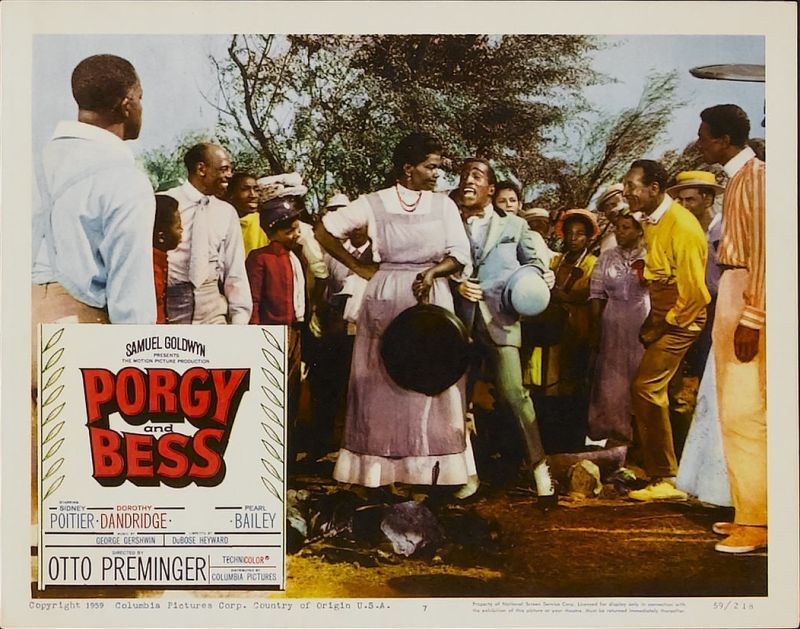 Porgy and Bess – Pearl Bailey and Sammy Davis, Jr.
This film was one of Brock Peters’ first movies. He also starred alongside Dorothy Dandridge in Carmen Jones (1954) under the name Broc Peters in the role of Sergeant Brown.
The acting and directing (Otto Preminger) in Porgy and Bess is outstanding – as you’d expect from this lineup! The only regrets I have after watching this film are…

Sadly, the movie is next to impossible to find on television. If you ever get the opportunity to watch it, be sure to check it out.  The performances will blow you away. 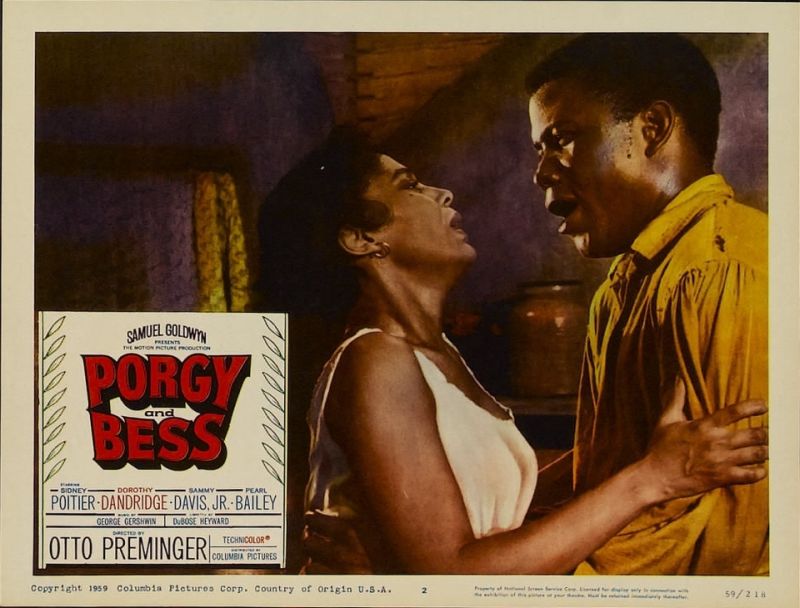 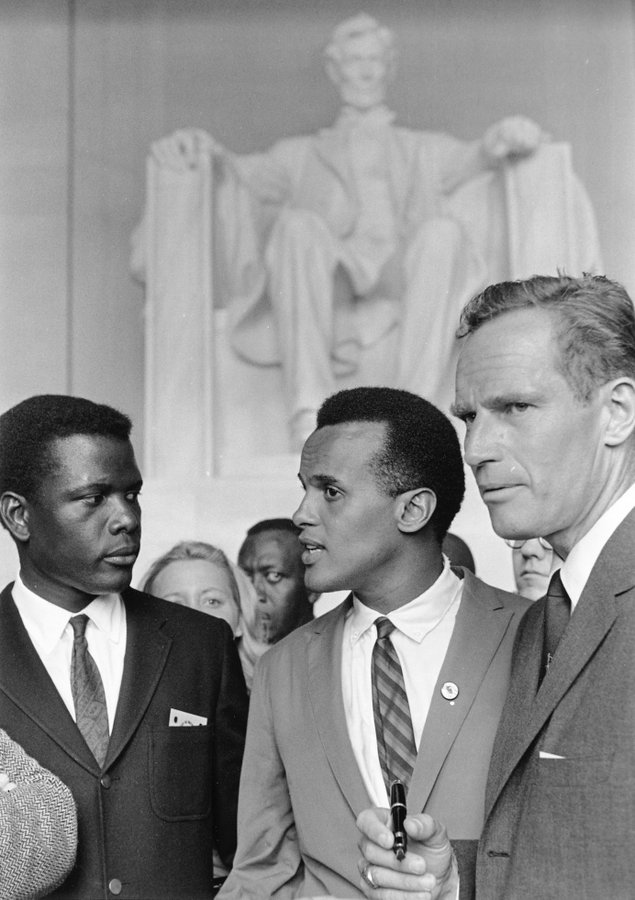 Sidney Poitier, Harry Belafonte, and Charlton Heston
When two of your favorite actors or actresses happen to be friends in real life, it’s pretty cool, isn’t it? Sidney Poitier and Harry Belafonte are actually longtime friends. They were born just nine days apart and first met in New York (when they were 20) before either was in show business.
I love both actors/activists so much. Class acts, talented men, and great role models for young men today.
The actors made Uptown Saturday Night (1974, Directed by Sidney Poitier) and Buck and the Preacher (1972, also Directed by Sidney Poitier) together. I can’t tell you how much I wish they had (or would have!) more collaborations.
(Photo: Civil Rights March 1963 – Charlton Heston is also pictured.) 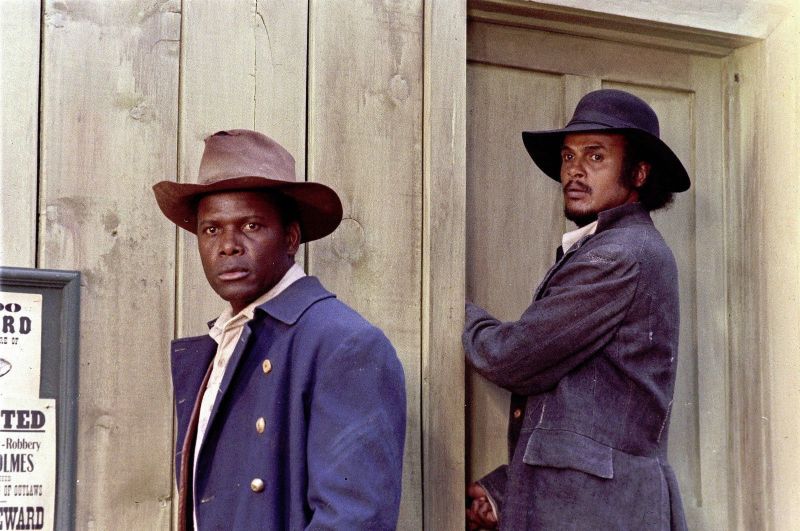 Sidney Poitier and Harry Belafonte, Buck and the Preacher (1972)

How’s this for a great picture of the day? Two of my favorite actors in one place… BANG! Well, literally bang because this picture of the talented twosome is a scene from the wonderful western Buck and the Preacher (Amazon link). 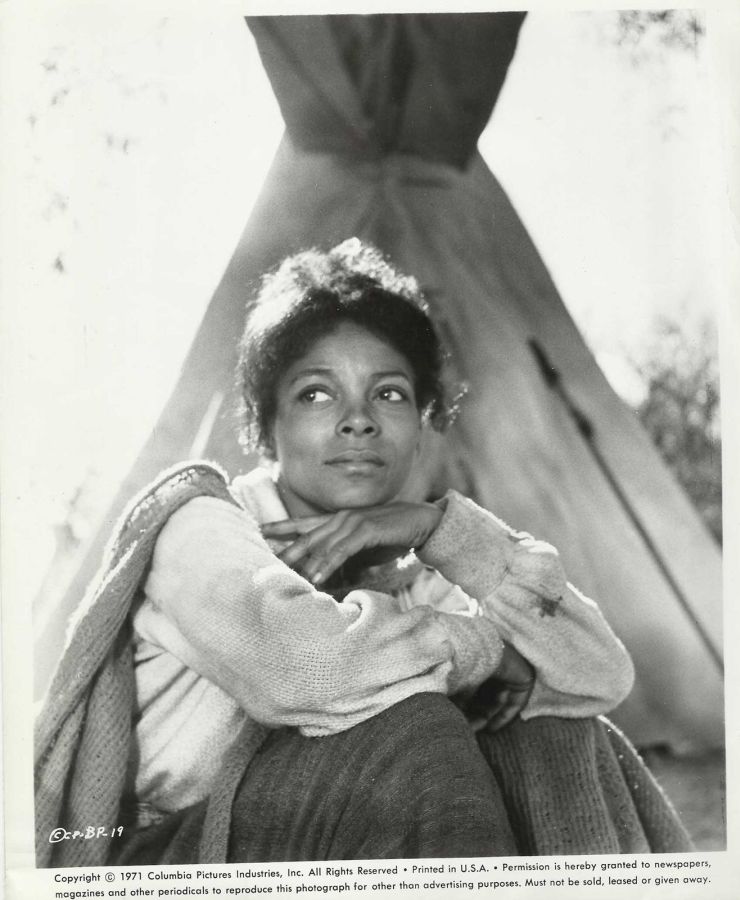 This western isn’t shown often on television and it’s a real shame. Ruby Dee and Cameron Mitchell also starred in this one. Ruby Dee is, as always, mesmerizing in her role as Ruth. This talented lady was quite an actress and should be as much of a household name as anyone.

Speaking of household names, I love the way Sidney Poitier (who also directed the film) and Harry Belafonte worked together in Buck and the Preacher and wish they’d made a lot more movies together.

I hope you’ll check this western out as soon as possible. Phenomenal cast and the directing… by Mr. Poitier.. is excellent.

Seriously… is there anything this man can’t do? 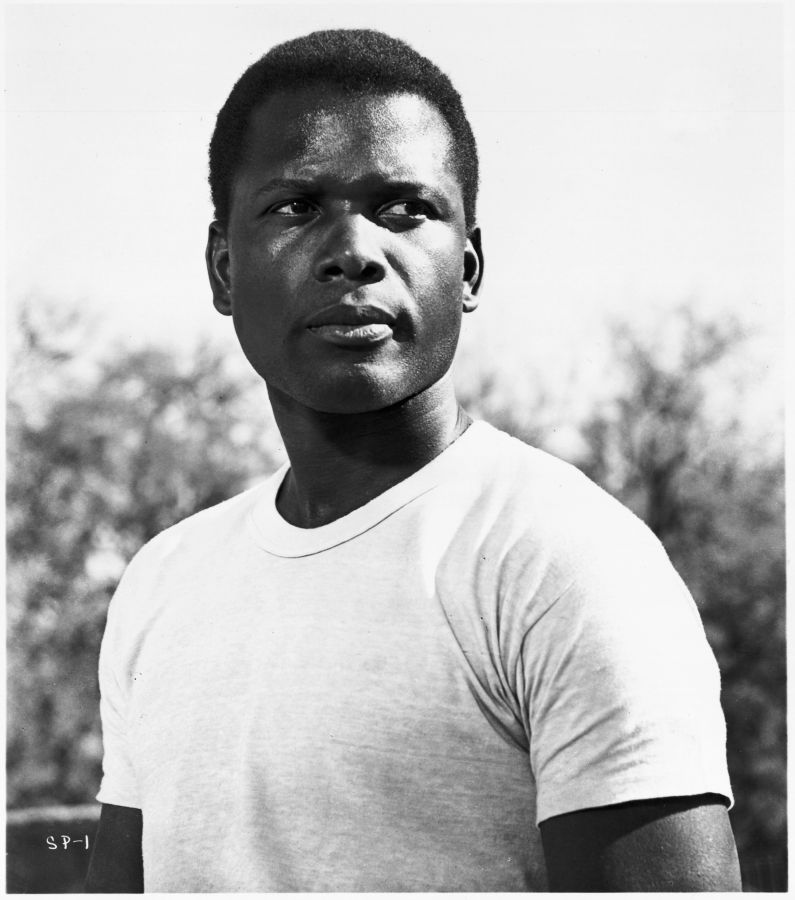 Unless you’ve lived in a cave for your entire life, you know the gentleman above – the great, great (some stars make it necessary to repeat yourself) actor Sidney Poitier. As fine an actor – and human being, for that matter – as you’ll ever hope to read about.

While I have many favorite Sidney Poitier roles and films, Lilies of the Field (Amazon dvd link) and his excellent, award-winning portrayal of Homer Smith are right up there. Each time I think it is, unquestionably, my favorite Poitier film, I’ll re-watch another one and think…. “How can I possibly choose just one?!”

I love both him and Harry Belafonte to distraction, so their Buck and the Preacher (Western they made in 1972 with Ruby Dee and Cameron Mitchell) always has to be in the conversation when talking about my favorite Poitier films. Have you ever seen this one? I just love it! Even the theme music is to die for.

At any rate… back to Lilies of the Field. When it comes to old movies and favorite stars, I tend to ramble off and have to get myself back on the main road from time to time. Or had you noticed?

Sidney Poitier, who directed the film, won the Best Actor Oscar for his role as Homer Smith. He also won the Golden Globe as Lead Actor. Both awards were very well deserved, as he did a remarkable job.

While Poitier is thought of, primarily, as an actor (and idol to the millions who know a great smile when they see one!!), he was also an exceptional director, with 9 titles to his credit. 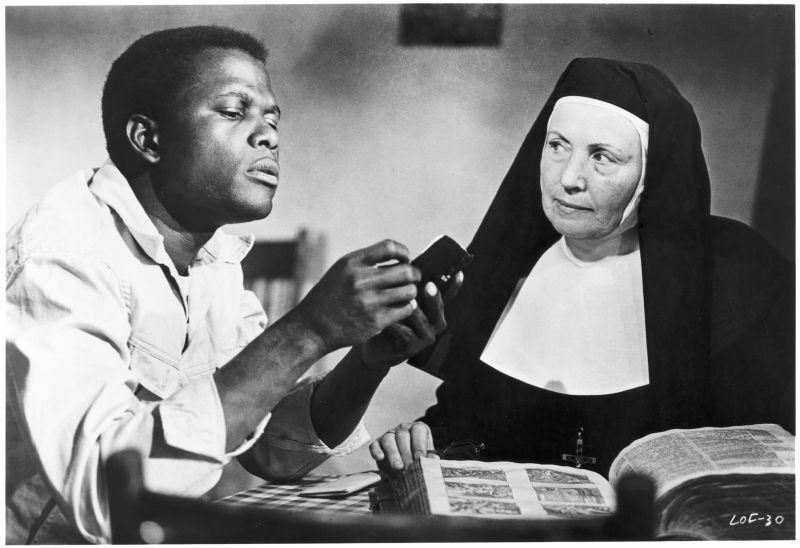 Sidney Poitier and Lilia Skala, Lilies of the Field

A Few Interesting Bits of Trivia:

If you’ve never seen this incredible film, I hope you’ll watch it at your earliest convenience. It is extraordinary. 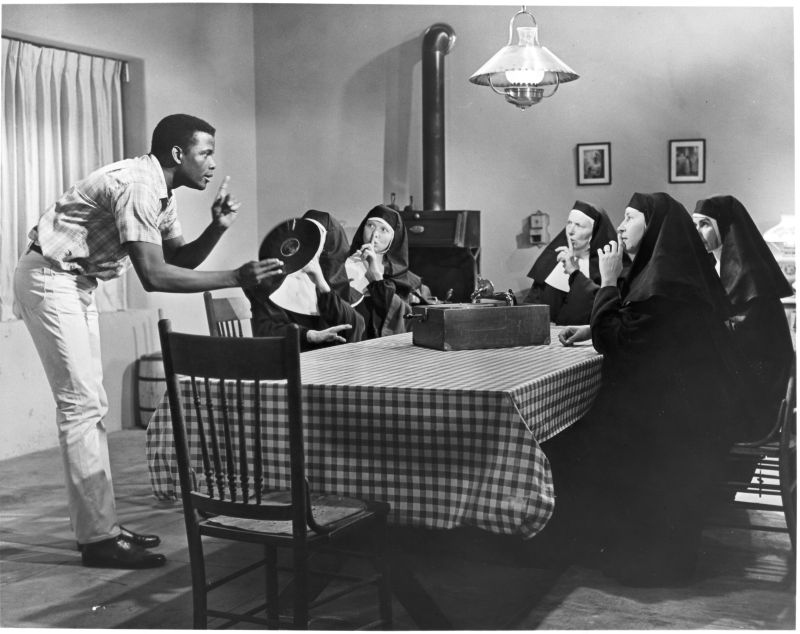 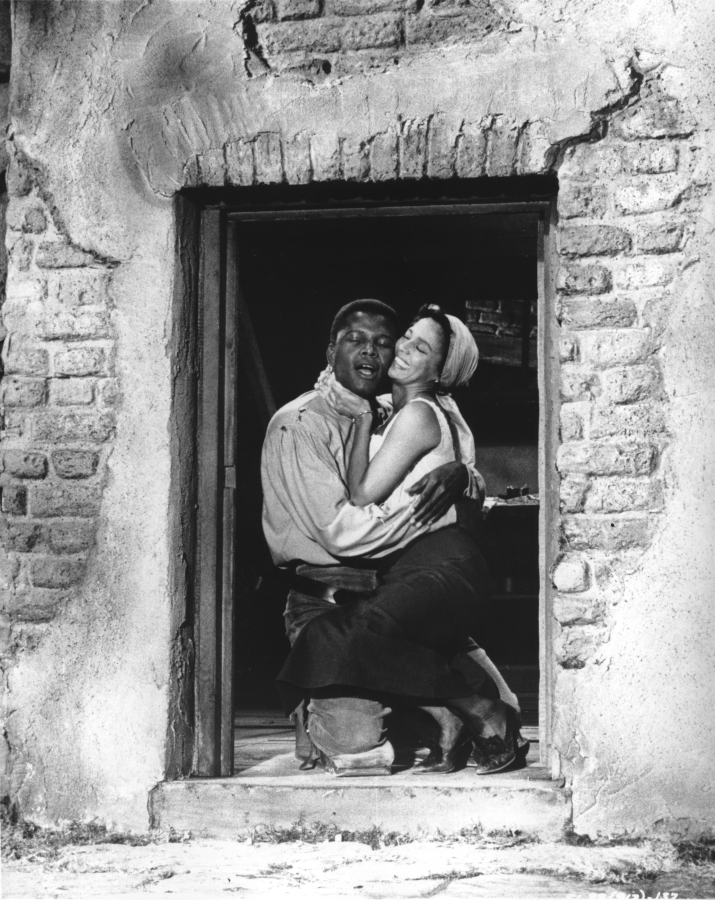 Now… ladies and gentlemen… this is what you call a beautiful couple. Sidney Poitier and Dorothy Dandridge were excellent in Porgy and Bess (1959) – just excellent. If you’ve never seen this film, I hope you’ll catch it as soon as possible. It’s unique, full of heart and emotion, and boasts as strong a cast as you’re going to find. Sidney Poitier, Dorothy Dandridge, Sammy Davis Jr., Pearl Bailey, Diahann Carroll, Brock Peters, Claude Akins… WHAT A CAST!

In addition to these huge names, the cast is rounded out by extremely talented men and women who didn’t achieve the level of fame their co-stars did but contributed strongly to this legendary film.

The problem with finding this film is that it no longer seems to be in circulation on DVD. Believe me, I have looked and looked. I need it for my Dorothy Dandridge collection and it simply doesn’t seem to exist on DVD. If you can find it on television (again, sadly, it’s very hard to find), I hope you’ll catch it. It’s a masterpiece.