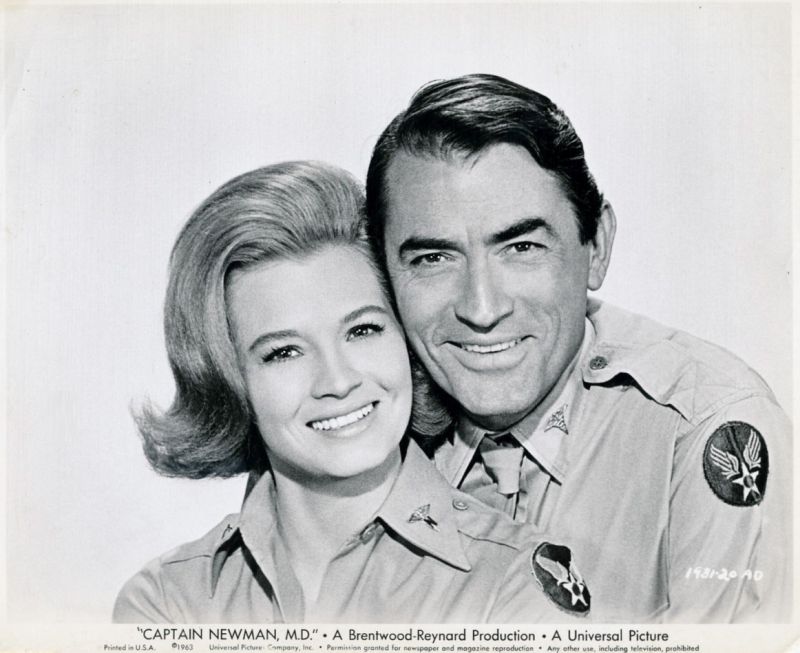 As I’ve been known to bellyache about before (and will again), many films and stars from the 50s-70s often get lost in the shuffle. Old Hollywood fans often gravitate toward the 20s-40s and modern movie fans often don’t venture from the 90s-today. When they DO “go back” to what they consider old Hollywood, it’s often the 80s.

The sad thing is, there are a wealth of wonderful movies, stars, and performances from 1950-1979 – dare I say it? Yeah, why not. There is just as much magic and fun to be had during this time as before or after this time.

Angie Dickinson and Gregory Peck are two of the many stars I love most during the 50s, 60s, and 70s. The wonderful Gregory Peck, of course, made some extraordinary movies in the 40s as well whereas the younger Angie Dickinson didn’t come onto the scene until the 50s.

Captain Newman, M.D. is a highly entertaining movie starring both of these talented stars as well as a few other names I’m sure you know… Tony Curtis, Eddie Albert, James Gregory, Robert Duvall, Dick Sargent, and Bobby Darin.

Directed by David Miller, Captain Newman, M.D. has the distinction of being the rare “War Comedy Drama.” The comedy part seems kind of out of place for a war movie, doesn’t it? However, the movie brilliantly, aptly, and perfectly intertwines drama and comedy – the latter making the former much easier to handle.

If you’ve never seen this one or if it’s been awhile, I hope you’ll find it and revisit the colorful cast.

You can find Captain Newman, M.D. on dvd on Amazon.