You are here: Home / Film History / Vitagraph by Andrew A. Erish: A MUST-Have Book for Film Historians (Review) 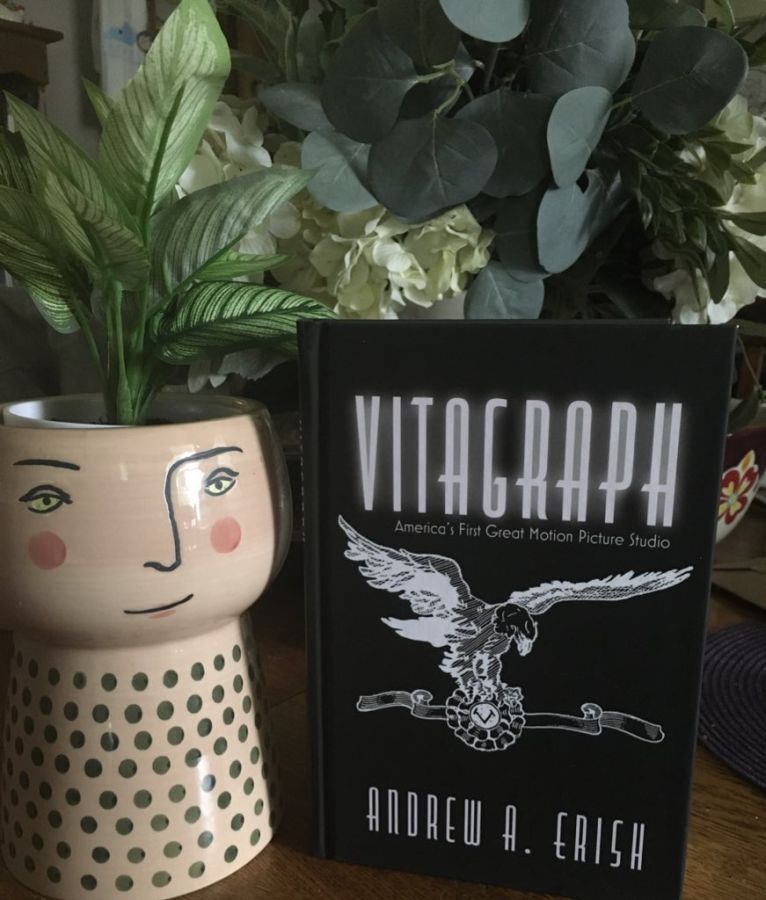 Film Historian is a term that can find itself in the middle of many hot debates. Those who have studied in college classes (for anywhere between 2-4 years) for the dubious distinction of being a “film historian” and those of us who have studied outside of a college setting (over the course… excuse the pun… of a lifetime) because we believe ourselves to already be “film historians” sometimes disagree over who can and who can’t claim the term.

I sometimes wish I had earned a degree to prove to others that I am a film historian, but then I wonder…. would I be a better cook if I had been to cooking school? No. (sorry, I’m full-on cocky about my cooking!).

Like all film historians – those with the college degree to prove it and those without – I arm myself with as many books as possible to feed my addiction. Biographies, autobiographies, memoirs… trivia books…  if it has to do with old Hollywood, classic radio and classic television, it’s on the bookshelves, frequently consulted and forever treasured.

The book pictured here, Vitagraph: America’s First Great Motion Picture Studio by Andrew A. Erish is the latest to join my collection and quickly became a favorite. This fascinating and eye-opening book feels like a textbook (if only my Psychology textbooks had been half as fascinating!) – one that would be used when studying film history.

Yes, inside OR outside of college.

When I took photos of it to use for this review, I even created a new folder for it titled “Film History.” First time I’ve ever done that, which should tell you how informative and deliciously interesting this book is.

I just created a whole new category (and Vitagraph is the first entry) called Film History because this book has renewed the desire within me to learn all I can about the fascinating subject.

Vitagraph is from the University Press of Kentucky and was sent to me to read in exchange for telling you about it. My review and opinion were, of course, left entirely up to me. I’m guessing they really had no idea just how much I would love this book.

When writing book reviews for Hollywood Yesterday (or my other blogs, for that matter), I’m always left with a quandary – describing how much I enjoyed reading the book without spoiling it for future readers. It’s the same with movie reviews, too, if we’re being honest, which is why my movie reviews and book reviews sometimes tend to be shorter than some – I figure, the less I say, the less apt I am to give anything away that I want others to discover for themselves AND the less I hold them here, the quicker they can get there to order the book or watch the movie!

In Vitagraph, Andrew A. Erish provides the first comprehensive examination and reassessment of the company most responsible for defining and popularizing the American movie. This history challenges long-accepted Hollywood mythology that simply isn’t true: that Paramount and Fox invented the feature film, that Universal created the star system, and that these companies, along with MGM and Warner Bros., developed motion pictures into a multi-million-dollar business. In fact, the truth about Vitagraph is far more interesting than the myths that later moguls propagated about themselves.

Established in 1897 by J. Stuart Blackton and Albert E. Smith, Vitagraph was the leading producer of motion pictures for much of the silent era. Vitagraph established America’s studio system, a division of labor utilizing specialized craftspeople and artists, including a surprising number of women and minorities, whose aesthetic innovations have long been incorporated into virtually all commercial cinema. They developed fundamental aspects of the form and content of American movies, encompassing everything from framing, lighting, and performance style to emphasizing character-driven comedy and drama in stories that respected and sometimes poked fun at every demographic of Vitagraph’s vast audience. The company overcame resistance to multi-reel motion pictures by establishing a national distribution network for its feature films. Vitagraph’s international distribution was even more successful, cultivating a worldwide preference for American movies that endures to the present. For most of its existence America’s most influential studio was headquartered in Brooklyn, New York before relocating to Hollywood.

Finally, here is a historically rigorous and thorough account of the most influential producer of American motion pictures during the silent era. Drawing on valuable primary material long overlooked by other historians, Erish introduces readers to the fascinating, forgotten pioneers of Vitagraph.

Allow me to say, somewhat red-faced, that I had no idea how vital Blackton and Smith’s contributions were. When my daughters were small, we’d build elaborate homes for their Barbies. We’d use the largest, sturdiest building pieces for the foundation. Without saying it, we knew that was the most vital part of the entire creation. Certainly the foundation wasn’t the flashiest component, but everything else rested upon it and would come crashing down without it.

As I reached the end of reading Vitagraph (or as I nearly finished the film history course!), these Barbie mega houses came to mind. Blackton and Smith were the foundation upon which so very much (yes, flashier and more eye-catching) was built upon.

Mixed in with the excitement of meeting new faces and acquiring so much wonderful knowledge was a hint of melancholy. These names (Albert E. Smith and James Stuart Blackton) should be as remembered and honored today as other film greats. It’s my sincere hope that Andrew A. Erish’s wonderful, wonderful book helps make this happen.

What I Love Most About Vitagraph:

I always tell people that you can never, ever underestimate the power of films and entertainment. They influence so much in and around us – fashion, expressions, hairstyles, cars, ideologies… make no mistake about it, nothing stays solely “in the movie” or “on the tv.” It reaches out and touches us all.

It’s high time the fingerprints of Albert E. Smith and James Stuart Blackton get the credit they deserve and I very much hope you’ll add Vitagraph to your personal library. Andrew A. Erish has written a masterpiece.

You can find Vitagraph by Andrew A. Erish on The University Press of Kentucky or Amazon.