You are here: Home / Janet Leigh / The Naked Spur with James Stewart and Janet Leigh

I recently re-watched The Naked Spur for probably the 12th time in my life. How could I not? James Stewart is one of my all-time favorites and Westerns are my jam… and jelly… and toast.

I have a ridiculous confession to make concerning this movie. Like 85 percent of Westerns I’ve seen, my first experience with them was as a child. My dad lived for Westerns, so they were pretty much on 24/7 in our home. Cowboys, “Indians,” saloon girls, deputies, and sheriffs were like family.

When growing up, whenever my dad  had The Naked Spur on tv, I had the same three initial reactions each time:

So I never watched it in it’s entirety. I had a problem getting past Janet Leigh for some reason. As a young girl, my ideal leading lady in Westerns (as well as tv and other movies) looked closer to the dolls I played with. She needed the flowing brunette, red, or blonde hair and pretty clothes. Janet Leigh, with her sassy short hair and decidedly “boy clothes” didn’t amuse the child version of me any more than angry “George Bailey” did.

Fortunately little girls grow up. When I was older, I watched the movie past the 10 minute mark (all the way to the end) and wondered how I could have been so wrong. James Stewart was, of course, wonderful in the role (the range of this actor is amazing) and as for Janet Leigh… gorgeous.

The kid version of me couldn’t get past the clothes, the adult version of me can’t get past the face. Seriously, this is the exact face you’d expect angels to have. She was a stunning actress and doesn’t get enough credit for being one of the loveliest and most talented actresses ever. Although she doesn’t smile often in the movie, when she does it lights up the screen. Her’s is one of the most beautiful smiles to grace any screen, small or large.

Although I love Westerns as much as anyone and probably more than most, I’ll be the first to admit that the “story” isn’t always the star. In fact, many times (after watching a Western), you’ll find yourself asking, “Okay, what was the plot exactly??”  The Naked Spur has a creatively-written plot – an actual story, if you will. The characters are all flawed to a certain degree, which makes it even more entertaining.

The film also stars Ralph Meeker (Roy) and Millard Mitchell (Jesse).  Mitchell’s Jesse is my personal favorite character in the movie. Little greedy, but you know what, I’m going to go ahead and forgive him for that.

Filmed in the gorgeous Rocky Mountains, The Naked Spur is considered by many as one of the best westerns ever made.

When watching The Naked Spur, you, of course, have to keep in mind that it was made in 1953. Going in, expecting more than should be expected from this period will rob you from enjoying the movie as it should be enjoyed. Then again, that can be said of all the wonderful movies we celebrate here on Hollywood Yesterday.

The film is beautifully done and perfectly cast. It’s one of those films that I would (and do) watch every time it’s on television. 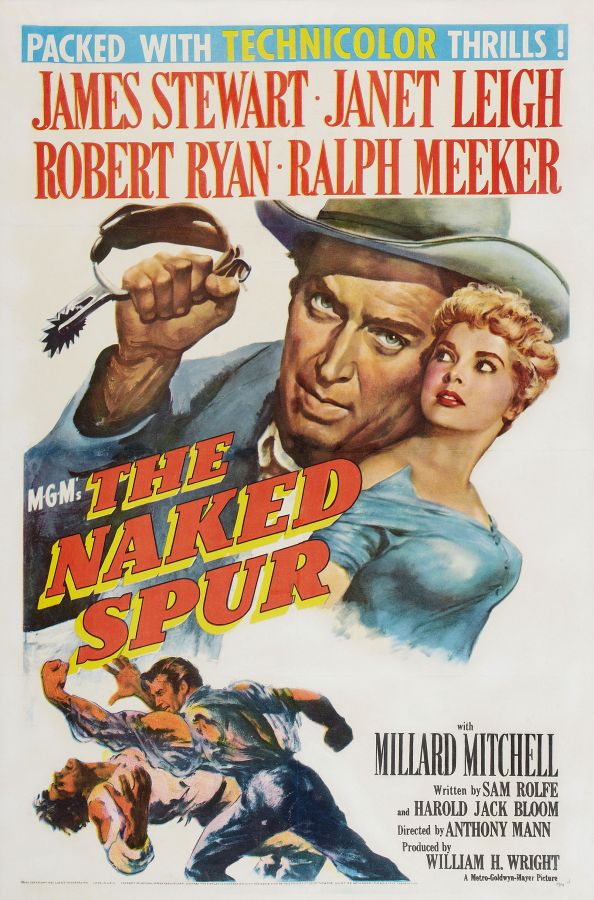 The Official Trailer for The Naked Spur

The movie is (MUCH) better than the trailer – although it’s a hoot kind of in spite of itself.

You can find The Naked Spur on Amazon.