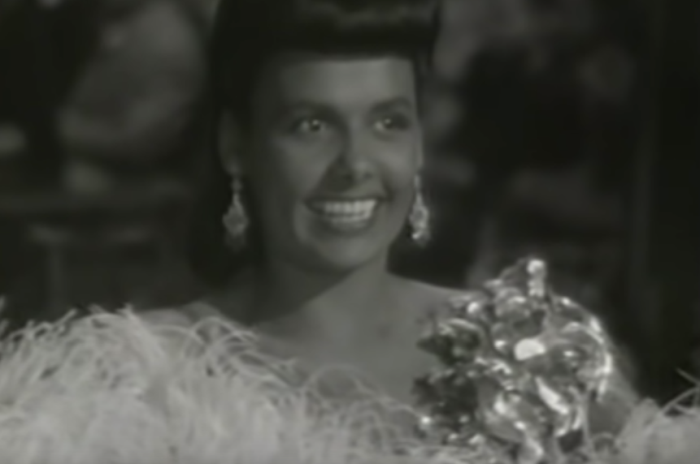 If you watch a lot of Old Hollywood movies – especially if you cover a LOT of territory (say from the silents through today) and a LOT of genres (silents, film noir, westerns, comedies, rom com, slapstick, drama..) – you meet a lot of new stars along the way. Stars who may have either missed your radar completely in the past or stars that, while on the radar, hadn’t really had their chance to shine for you. YET.

Personally, June Allyson is a perfect example of a star being on my radar (after I’d seen her in Executive Suite) but became an absolute favorite after I saw her in a few other films.

The beautiful and talented lady above, Lena Horne, is one who had completely escaped my radar somehow. It is only within the past few years that I saw my first Lena Horne movie!

It was love at first sight, so to speak, with Lena. She had a huge impact on me the minute she first danced on my screen. She had an obvious beauty that jumps out at you right away, with such a radiant complexion that you know shines from within. And the smile?  Her dazzling, perfect smile lights up the room. She had a happiness from within that put on a spectacular show on the outside.

Then when she opened her voice and began to sing… well, that’s when my jaw really hit the floor.

While I hate comparing stars and try (often unsuccessfully) not to do so – her gift for entertaining and for taking her viewers far, far away begs to be compared to that of Judy Garland. Yes, she was her own woman, actress, singer, dancer, and star BUT her showmanship and command of the spotlight greatly reminds me of Judy Garland – one of the  highest compliments that can be handed out, if you ask me.

I still just have no idea how I could have watched old movies and classic tv shows all of my life – and done so as though I were being paid to do it – and not ever come across a Lena Horne movie until recently. It never ceases to amaze me when I come across new favorites or begin to see an old favorite in an even better light. It’s also great fun when you start liking a star you’d previously disliked… yes, that has even happened from time to time!

I encourage you, yet again, to often step out of your favorite decade(s) and even genre(s). You never know who might be waiting for you on the other side. They might just have the most dazzling smile and beautiful voice you ever heard!