You are here: Home / Maureen O'Hara / Maureen O’Hara: The Biography by Aubrey Malone 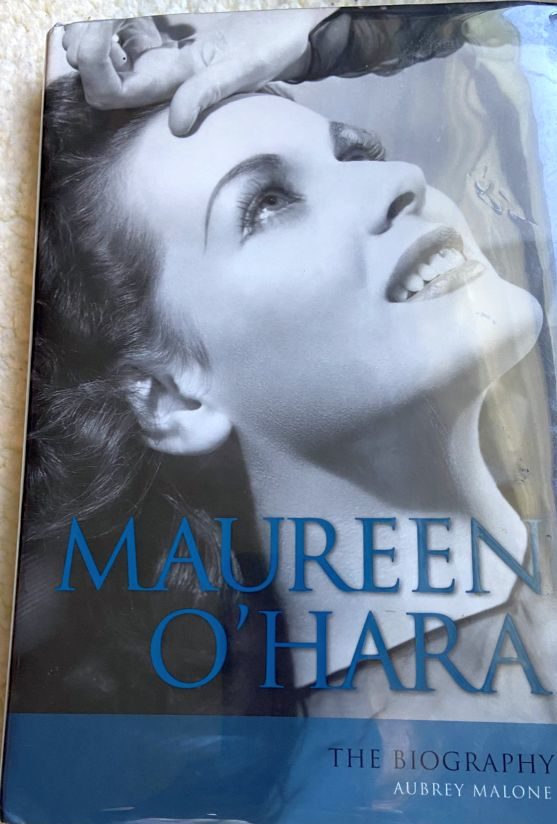 If you read this old Hollywood blog regularly, follow me on Twitter, and/or know me personally, you know all too well what a huge Maureen O’Hara fan I am. She’s one of the stars I am most identified with because, in many ways, she seems to be part of my dna.

I have many favorite actors and actresses (as my About page can attest) but Maureen O’Hara and Lucille Ball have been favorites of mine since I first knew what a television was. I have adored them and immersed myself in their work for so long, they’re a part of who I am in many ways.

Personally, I wouldn’t have it any other way.

It often seems that if I’m not watching a Maureen O’Hara (or Lucille Ball) movie or television show, I’m reading about one of them. Frankly, I don’t make it through a day without one or both of my redhead companions!

As you may know, I collect biographies and autobiographies of old Hollywood stars, jazz and blues legends, and historical figures. The book you see pictured here, Maureen O’Hara, The Biography by Aubrey Malone is one of my favorites. I turn to it and Maureen’s autobiography (‘Tis Herself) regularly.

When I watch (or rewatch) a particular film or television show, I like to go back and read about the making of the film and, when possible, what one of its stars had to say about the film… and, often, their co-stars (extra fun!). When you follow as many stars and watch as many films/shows as I do, the last thing you want to do is rely on your memory. I love having biographies and autobiographies to go back and learn more about what I’ve just watched. It’s fascinating and adds so many layers to what you actually see on film.

When the star is as colorful, charismatic, and honest as Maureen O’Hara, it’s especially fascinating to read what she thought about her films and how she felt about her co-stars.

Many people prefer autobiographies to biographies because, as they put it, “you hear, firsthand, what the star thought and experienced.”  While I agree that this is true and reading their thoughts and recollections is very fascinating… as someone who has read countless bios and autobios, I have to counter that a star will often tell (for better or worse) their side of a story, or how they recall the events. I am not saying this is a bad thing and I’m certainly not saying stars (especially incredibly honest ones such as Maureen O’Hara) would be apt to color events.

But think about this example. When filming The Quiet Man, Maureen would be able to beautifully recall her conversations with director John Ford and her experiences with her close friend and co-star John Wayne. She wouldn’t be able to, say, recall a conversation the two men may have had when she wasn’t around. A great biographer, however, will roll up his/her sleeves and dig in. They will research, read, and often conduct interviews to turn up information the stars, themselves, may not have been privy to.

What I’m saying is this: My vast experience with researching anyone (actors, actresses, historical figures…) has taught me that the absolute best way to get to know them is to…

As is the case with Maureen O’Hara, sometimes you strike gold and you have both a wonderful autobiography and a wonderful, definitive biography. I am so grateful that, in addition to her autobiography, author Aubrey Malone has provided us with a great biography as well. Combining the two provides the ultimate insight into her wonderful life, incredible career, and deliciously unique personality.

Maureen O’Hara was a beautiful force of nature and Aubrey Malone does an excellent job of proving the case. 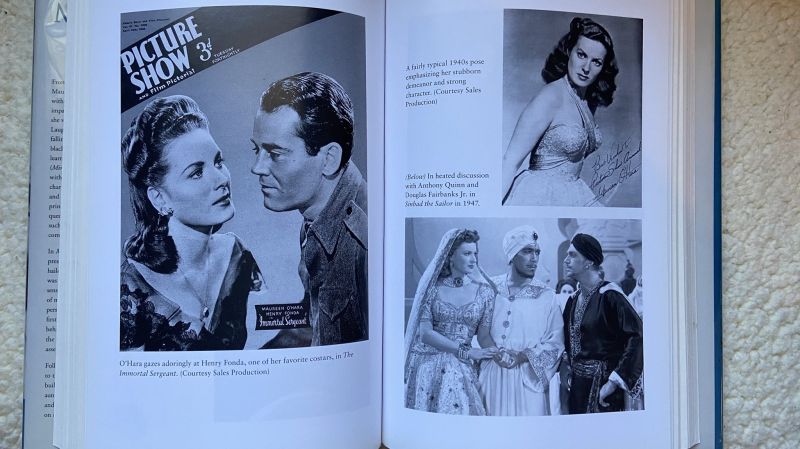 Photos from Maureen O’Hara, The Biography

Malone’s Maureen O’Hara, The Biography (Amazon link) is interesting, colorful, and enjoyable in every way. The photos included are an extra treat… and a beautiful one, at that.

From her first appearances on the stage and screen, Maureen O’Hara (b. 1920) commanded attention with her striking beauty, radiant red hair, and impassioned portrayals of spirited heroines. Whether she was being rescued from the gallows by Charles Laughton (The Hunchback of Notre Dame, 1939), falling in love with Walter Pidgeon against a coal-blackened sky (How Green Was My Valley, 1941), learning to believe in miracles with Natalie Wood (Miracle on 34th Street, 1947), or matching wits with John Wayne (The Quiet Man, 1952), she charmed audiences with her powerful presence and easy confidence.

Maureen O’Hara is the first book-length biography of the screen legend hailed as the “Queen of Technicolor.” Following the star from her childhood in Dublin to the height of fame in Hollywood, film critic Aubrey Malone draws on new information from the Irish Film Institute, production notes from films, and details from historical film journals, newspapers, and fan magazines. Malone also examines the actress’s friendship with frequent costar John Wayne and her relationship with director John Ford, and he addresses the hotly debated question of whether the screen siren was a feminist or antifeminist figure.

Though she was an icon of cinema’s golden age, O’Hara’s penchant for privacy and habit of making public statements that contradicted her personal choices have made her an enigma. This breakthrough biography offers the first look at the woman behind the larger-than-life persona, sorting through the myths to present a balanced assessment of one of the greatest stars of the silver screen.

If you want to know more about Maureen O’Hara, her warm relationship with friends such as Charles Laughton, Lucille Ball, and John Wayne… as well as her unique relationship with director John Ford, you’ll definitely want to read Maureen O’Hara, The Biography (Amazon link). The book is available new as well as used on Amazon and I couldn’t possibly recommend it enough.