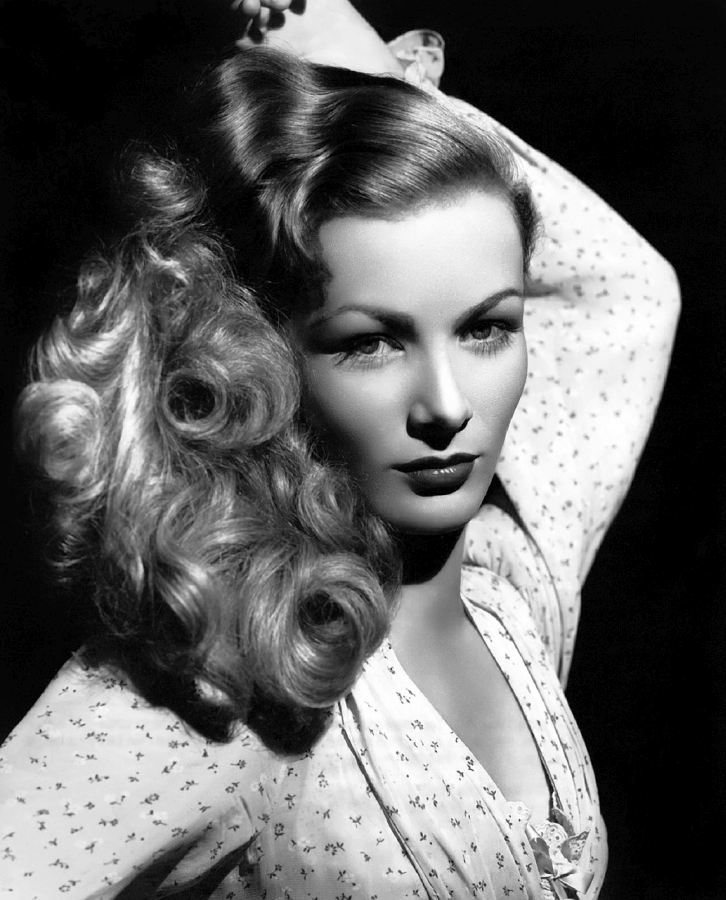 Veronica Lake was sultry before sultry was even a word. Trust me, I checked. She was born Constance Frances Marie Ockelman in Brooklyn, New York on November 14, 1922. Veroncia’s first exposure to acting was when she starred in a school play as a small child.

Veronica’s father was killed in an oil explosion when she was only 12. After her mother remarried, the family moved around a great deal – Canada, New York, and finally Miami, Florida.

By the time Veronica had graduated from high school she was already known as one of  Miami’s elite beauties.  Next stop? Hollywood.  Her mother and step-father moved to a small home in Beverly Hills, California in 1938 and enrolled Veronica in the well known Bliss Hayden School of Acting in Hollywood.

Hollywood responded almost immediately. Her first movie was as one of the many coeds in the RKO film, Sorority House (1939) in 1939.  Although it was a very, very minor part, it served its purpose, Veronica beautiful face was now on the much-coveted Hollywood radar.

1940 brought relatively small roles in two more films: Young as You Feel and Forty Little Mothers.  To this point, Veronica was acting under her given name,  Constance Keane.

When a better role (in 1941’s I Wanted Wings) came along,  she was asked to change her name and Constance Keane became Veronica Lake.

Veronica now had a speaking role and, finally, felt like a real actress.  The film was a success and movie goers fell in love with Veronica. Paramount signed their new star to two more films that year, Hold Back the Dawn (1941) and Sullivan’s Travels (1941). The latter received good reviews from the always tough film critics.

As Ellen Graham, in This Gun for Hire (1942) the following year, Veronica now had top billing!

Veronica was on top of the world and the public couldn’t get enough of her.  Her beauty, voice, talent and screen-presence earned her a huge legion of fans. They were fascinated with their new star. In 1943, Veronica  portrayed Lieutenant Olivia D’Arcy in So Proudly We Hail! with Claudette Colbert. The film was a huge, huge success.

Just when Veronica Lake seemed to have the Midas touch, The Hour Before the Dawn (1944) came along and proved to be a disaster. The movie was not well-received by the public or the critics.  Veronica’s unfortunate role was  Nazi sympathizer Dora Bruckmann and the whole experience was a train wreck. Critics hated her accent because it wasn’t true to life.  What’s more, her acting was less than impressive. Most fans (this one included) attribute this to the horrible accent she had to endure. It’s hard to focus on acting when you’re mind is on speaking with an accent that’s… literally… foreign to you.

Mediocre films followed throughout 1945.  Hold That Blonde, Out of This World, and Miss Susie Slagle’s were disappointments for the studios, the fans, and Veronica Lake, herself.

In 1946, Veronica was in a much better film, The Blue Dahlia with Howard Da Silva. The film was a hit, but it was the last hit for Veronica. Paramount continued to put her in movies that weren’t just bad…. they were VERY bad.

After 1948, Paramount let go of their once prized star. In 1949, she starred in the Twentieth Century film Slattery’s Hurricane (1949), another very weak film.

She was not on the big screen again until 1952 when she appeared in Stronghold (1951). By Veronica’s own admission, the film “was a dog.”

From 1952 to 1966, Veronica made television appearances and even took to the stage.   Unfortunately she never found the success she longed for.

Life’s burdens, disappointments, and hardships took their toll on Veronica Lake and she turned to alcohol.   In one of the saddest stories from the Golden Age of Hollywood, Veronica was miserable and drank very heavily. In 1962, she was found living in an old hotel and working as a bartender.

She finally returned to the big screen in 1966 in Footsteps in the Snow. Another lengthy period of time passed and she last appeared onscreen in 1970’s Flesh Feast  – a very, very, very low budget film.

On July 7, 1973, Veronica died of hepatitis in Burlington, Vermont. The beautiful actress with the peek-a-boo hairstyle was dead at the young age of 50.

I ALWAYS hate (with a great passion) to have to write about the ugly side of a star’s life. We have the beautiful, glossy, shiny side that we want to remember. For Veronica Lake, it’s certainly the beautiful pictures and sultry attitude. Unfortunately, like everything in life, there’s another side to the story. For this beautiful actress, with the undeniable face of an angel, the other side was this – she had uncommonly high expectations for herself in Hollywood. Given the fact that her career started off with such a bang, how disappointing (and ultimately devastating) must all of the flops have been?

Can you imagine how it must have felt for your adoring and seemingly loyal legion of fans to suddenly turn on you? Veronica’s life was turned upside down and it’s almost impossible to land on your feet when that happens. So, no I’m not here to judge and I’m certain you won’t either. She isn’t the first (or last) person that fickle fame chewed up and spit out.

Veronica battled alcoholism which may have been largely due to the fact she suffered from paranoid schizophrenia – as her mother claimed in the biography, “Peekaboo.” Her mother attributed her erratic behavior and numerous infidelities to this very disorder. The fact that she lived in a time long before doctors knew how to effectively treat the disorder makes it heartbreaking to think of what she went through.

Obviously Hollywood Yesterday wants to celebrate the better side of the stars we write about. We want to give these men and women a chance to shine brightly forever and to be remembered as they wanted to be. So enjoy the gorgeous pictures of Veronica Lake and remember her gracefulness, beauty, talent, and ambition.

It’s very much what she’d have wanted.

“You could put all the talent I had into your left eye and still not suffer from impaired vision.” – Veronica Lake