You are here: Home / Bob Hope / Bob Hope: My Life in Jokes by Bob Hope with Linda Hope (Review) 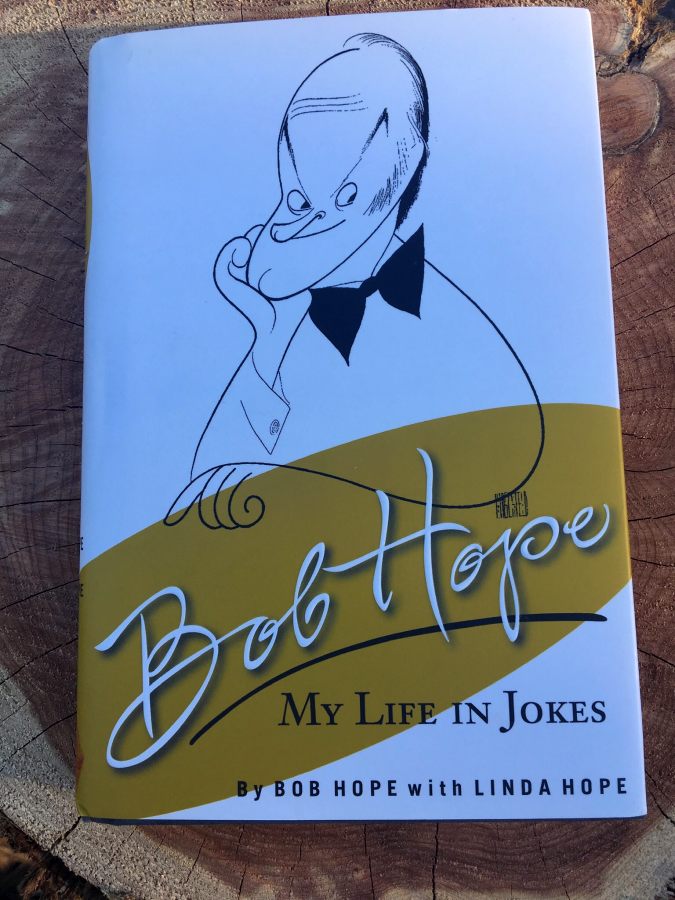 Bob Hope: My Life in Jokes

One of my favorite entertainers of all time is synonymous with the word, itself: Bob Hope. The man was simply brilliant in everything he did – every word, every joke, every film… brilliant.

Not only was Bob Hope a wonderful actor and entertainer, like some of my other favorites, he was also all class – with some to spare. James Stewart, Bob Hope, Lucille Ball, Hattie McDaniel, Maureen O’Hara, Olivia de Havilland… some stars were such high quality people that it makes being a fan as easy as an autumn breeze.

The book above, Bob Hope: My Life in Jokes by Bob Hope with Linda Hope is one of my all-time favorite books in my collection. It’s like sitting down in your favorite chair with a hot cup of tea (or tall glass of iced raspberry tea, depending on the season) and having Bob Hope, himself, stand in the middle of your room making you laugh until your sides ache.

“I was destined to be an actor. The day I was born, I stood up and took a bow. Really. When the doctor slapped me, I thought it was applause “

The stories, jokes, and vintage Bob Hope self-deprecating humor are such a joy, I’m really at a loss for words. If you, or anyone in your life loves to laugh, this book is a must have…. if you love to laugh and are a fan of the wonderful Bob Hope, Bob Hope: My Life in Jokes is an absolute MUST HAVE.

To comedians, ‘material’–their jokes–has always been precious, worthy of protecting and preserving. On stage, a good vaudeville routine could last years as it was performed on tour across the country. On radio, a year’s vaudeville material might be fodder for one week’s broadcast. Bob Hope used new material not only for his weekly radio series, but also for the several live charity appearances he made each week.

Organized by the stages of his life, accompanied by black-and-white photographs, this book gives readers a chance to enjoy the very best of Hope’s jokes, from his early years in vaudeville, his top-rated radio show in the ’30s and ’40s, his legendary television appearances, and much more.

Bob Hope’s wonderful, one-of-a-kind personality comes shining through on every page of this delightful and fun book.

“I knew the troops would be glad to see me. I said, ‘Look at me, fellas, these are the kind of clothes you’ll be wearing when you get home!’ Fifty guys re-enlisted.”

Bob Hope was in the forefront of the entertainment industry for virtually his entire life. Primarily a comedian, he also acted, sang, and even danced, hosted his own radio and television shows, and starred in sixty movies. Bob Hope’s dedication to and love for the American GI is legendary. He traveled around the world to entertain the men and women in uniform during World War II, the Korean War, the Vietnam War, and Desert Storm. No individual in the history of show business journeyed so far–and so often–to entertain so many. He received more than two thousand awards and citations for his humanitarian and professional efforts, and was honored and befriended by every U.S. president since Franklin Roosevelt.

“Jobs didn’t come easy. For months at a time, I forgot what kind of work I was out of.”

Bob Hope: My Life in Jokes is absolutely hilarious and would make a perfect gift idea for anyone. They broke the mold when Bob Hope came along and this collection is a perfect reminder of this very fact.