You are here: Home / Archives for Gordon MacRae 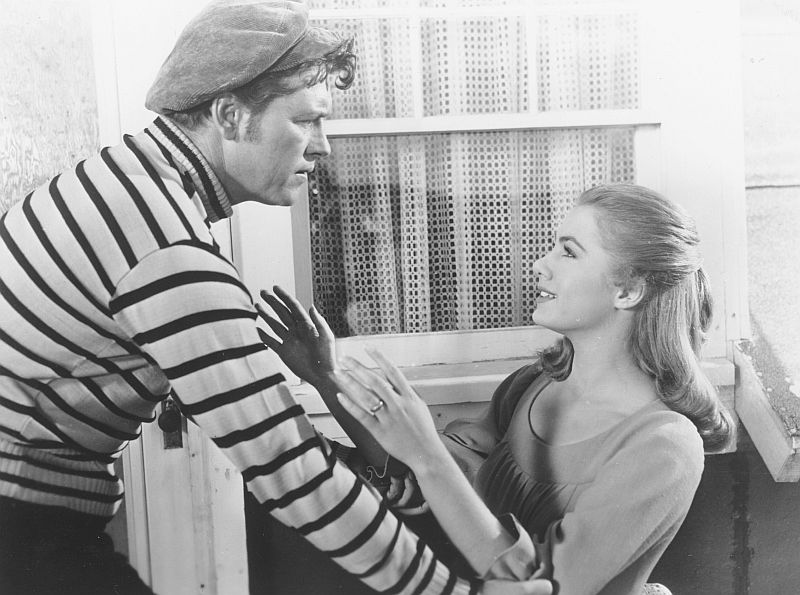 When you spend as much time with old movies and classic television as I do (and have for a lifetime!), you find yourself with quite a few favorite stars  – a look at the Hollywood Yesterday About Page will show you just how many! – but we all have what I like to call our “absolute favorites.” Our “ride or dies,” if you will. One of my own personal “absolutes” is Shirley Jones. I just love everything about her. Her movies, work on television, class… every bit of it.

I often find myself wondering why we (all of us who are immersed in old Hollywood – whether it’s from Silents through the 70s or only certain eras) don’t talk as much about the more recent stars as we do the older ones. I mean, Shirley Jones, Angela Lansbury, Ann-Margret, James Garner, Lee Marvin, Sally Field, Burt Reynolds, Robert Redford, James Caan, for example are every bit as wonderful and well-loved as, say, Marilyn Monroe, Rita Hayworth, James Stewart, Audrey Hepburn, Charlie Chaplin, and James Dean.

I believe part of it may be that when stars have been taken from us, we tend to try harder to keep their memory alive, whereas the wonderful stars who are still VERY much with us or who have only recently left us don’t cause us to feel quite as much of a pull to keep their face and name alive.

While that’s understandable to an extent, it’s also frustrating because I’d rather see all of us celebrate these stars while they’re still on this side of eternity to truly enjoy it. We have so many extraordinary stars who are still very much with us and I’m making it a mission to celebrate them just as much as anyone.

The only problem we run into at times has to do with photographs. Many of the stars of the early years of Hollywood have more photos available to us than the more recent stars. When it comes to photos that are in the public domain or images that are okay to use because they were promotional photos, the older may not necessarily be the better but the older is definitely the easier!

At any rate, I’m making it a personal mission to celebrate ALL of the stars of Hollywood Yesterday, regardless of just how “yesterday” it was!

The photos in this post are of the beautiful and talented Shirley Jones and her outstanding co-star Gordon MacRae from Carousel (1956, directed by Henry King). The movie also stars Cameron Mitchell and Barbara Ruick.

You can find the joyous musical Carousel on dvd (Amazon link) or watch on Prime Video. 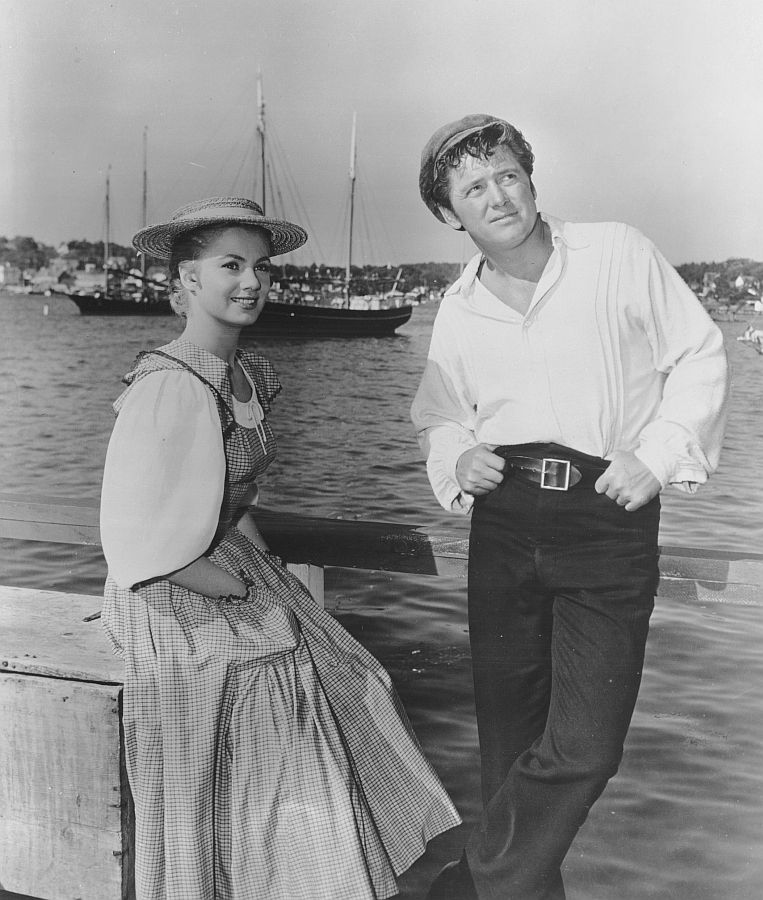 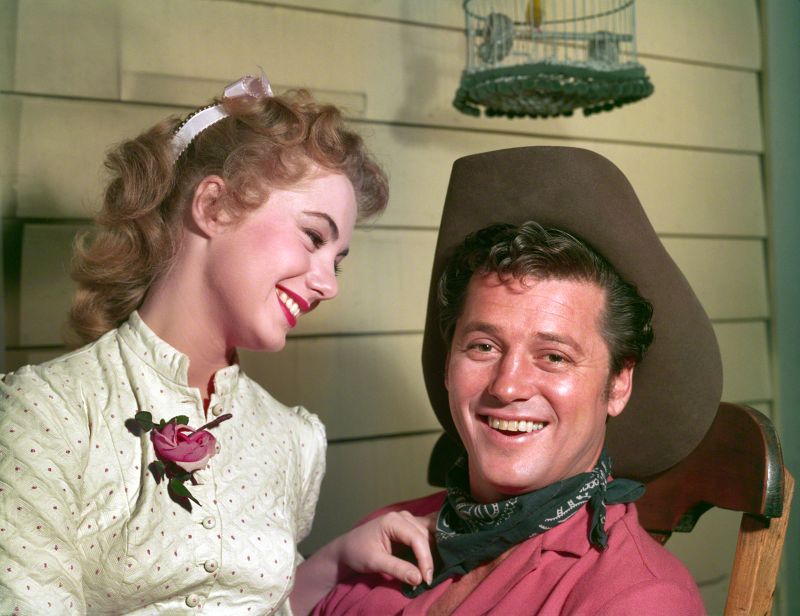 One of my favorite musicals is the wonderful, beautiful, and (in my opinion) perfect in every way Oklahoma! Shirley Jones is so darn good in the role of Laurey that it’s almost impossible to believe it’s her first movie… yet it was!

Don’t get me wrong, I love her in this role and couldn’t love Oklahoma? any more if it I had starred in it, myself (what a perfect flop that would have been!), but if this is the only role you know Shirley Jones from, please please please make a point of seeing her other films. NOTHING in the world wrong with her performance, obviously, I just don’t think you can get a full measure of a star from one film or even two.

Another example is Olivia de Havilland. I always beg people who have only seen her in Gone With the Wind to watch her in other films as well. Was she perfect as Melanie? Of course… but, like Shirley Jones’ Laurey, Melanie is pretty much one-dimensional. Both actresses have many wonderful dimensions and possessed (and still possess!) more charisma than one role allows them to showcase.

Again, nothing in the world against Laurey or Melanie – I love them both to distraction, but BOY, you should check out these ladies when they aren’t ALL sunshine and goodness!

You can buy Oklahoma! on dvd for your collection (I have a copy in my Shirley Jones collection and am so weird about my collections, I want to order one for my Gloria Grahame collection as well… there’s no making sense of my peculiarities, don’t even try). You can also watch it on Prime Video. 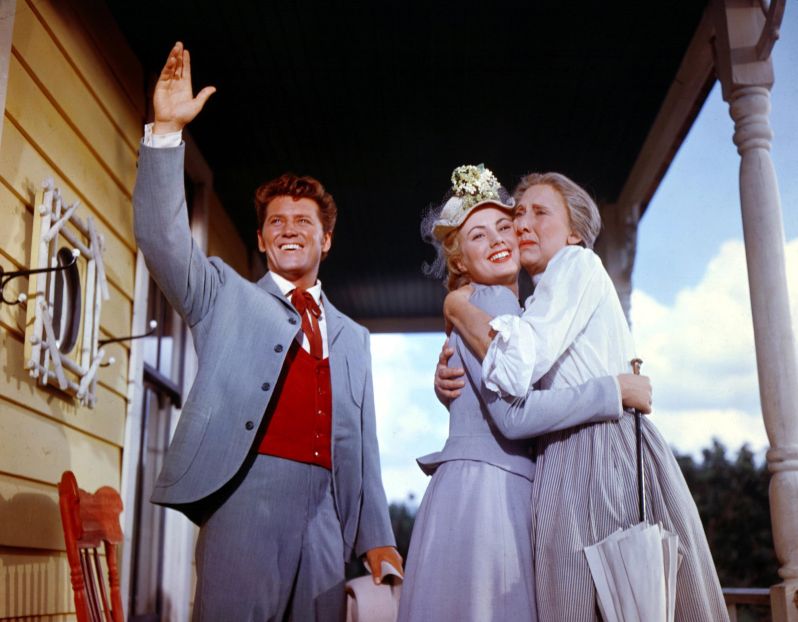 I’m in a bit of a hurry (supper needs to be cooked and I am starving!), but I was anxious to add today’s picture of the day – three of the wonderful cast members of a perfect musical, Oklahoma!: Gordon MacRae, Shirley Jones, and Charlotte Greenwood.

I rewatched this musical (for probably the millionth time) recently and realized something – I come to love it EVEN more each time I revisit these colorful, beautiful characters. If you haven’t seen it in a while, rewatch asap.

It’s good for the soul!

You can buy Oklahoma! on dvd or watch it on Prime Video.