You are here: Home / Archives for James Bond Movies 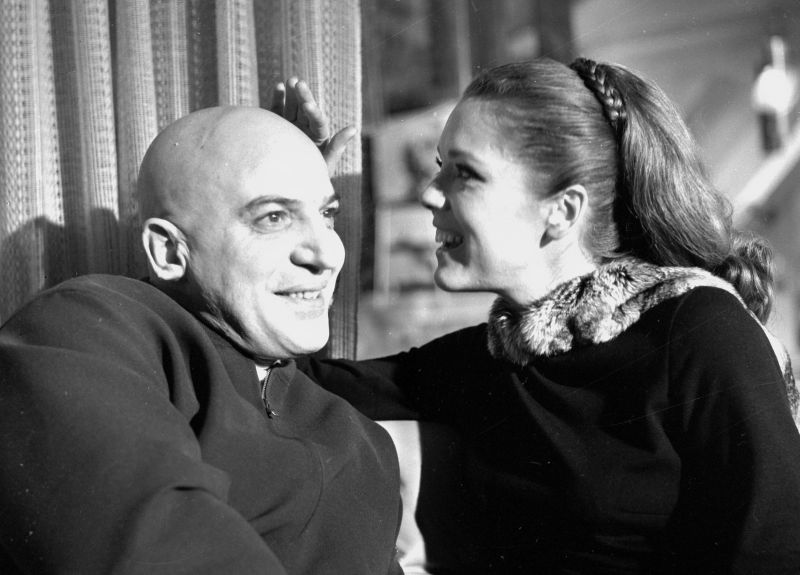 It also has one of my favorite Bond chase scenes. Yep, love everything about this one, friends.

Well, that is if you’re still my friends after my “favorite Bonds” confession. The Roger Moore and Daniel Craig fans just nod like, “Okay, to each their own…”  but the Sean Connery fans usually go for the jugular!

Just kidding.. the Bond fanbase is a gloriously devoted, passionate, and fun group. If only all movies and stars had such a passionate following.

See On Her Majesty’s Secret Service Candids for more. 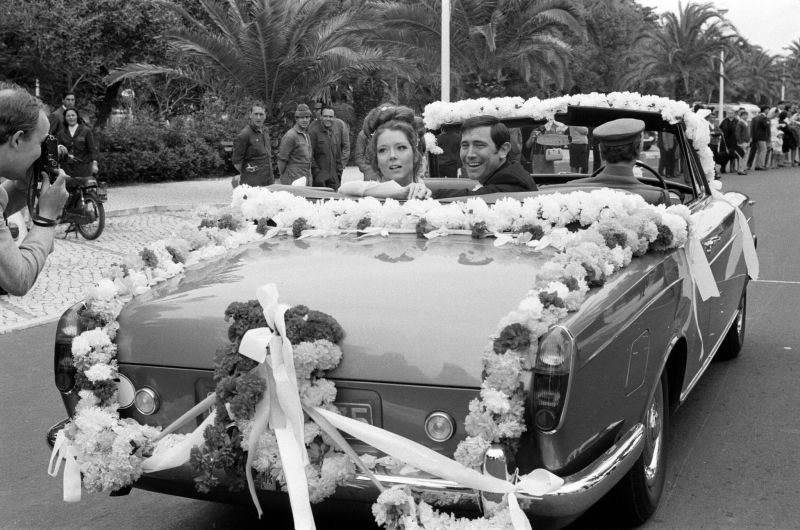 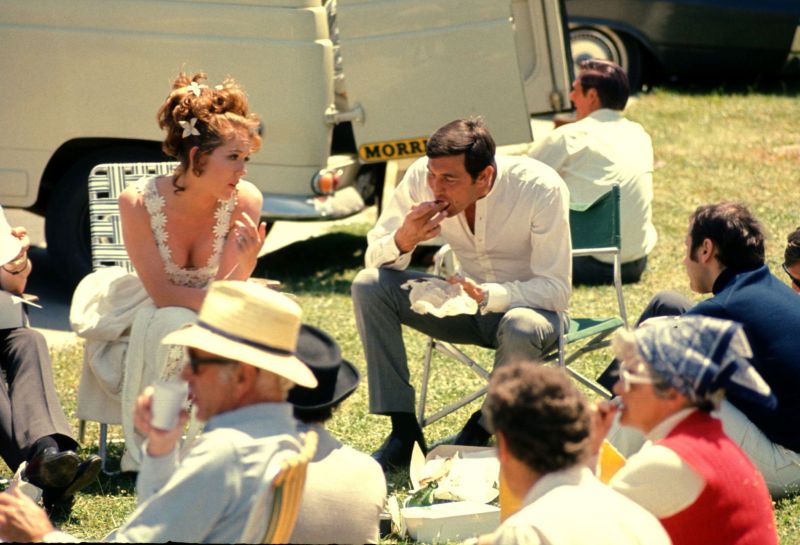 As you may know, I have a self-confessed obsession and deep-seeded fascination with behind the scenes photos. Call them behind the scenes, on set, or movie candids… call them whatever you want, so long as you call me when there’s one to dissect!

I love looking at the stars expressions and body language, the crew, cars, furniture, backgrounds – every darn thing. It’s like I’m at a steakhouse buffet and am on the brink of starving… give me all of it!!!

The way Diana Rigg is sitting in the photo below is my everything right now. I also love how careful Lazenby is being in the top photo – enjoying his food but being very careful not to get any on his white shirt. 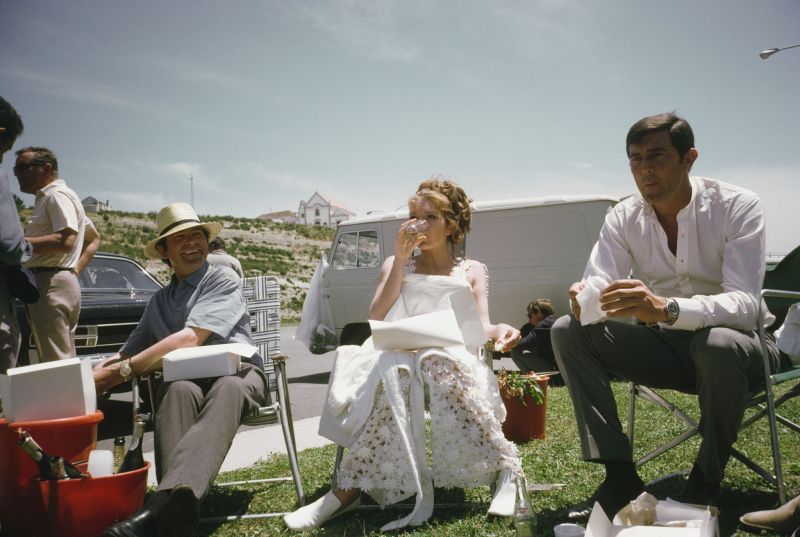 The photo of George Lazenby and Telly Savalas, below, reminds me of the famous chase scene in this movie – one of my favorite chase scenes from any movie… Bond or otherwise. 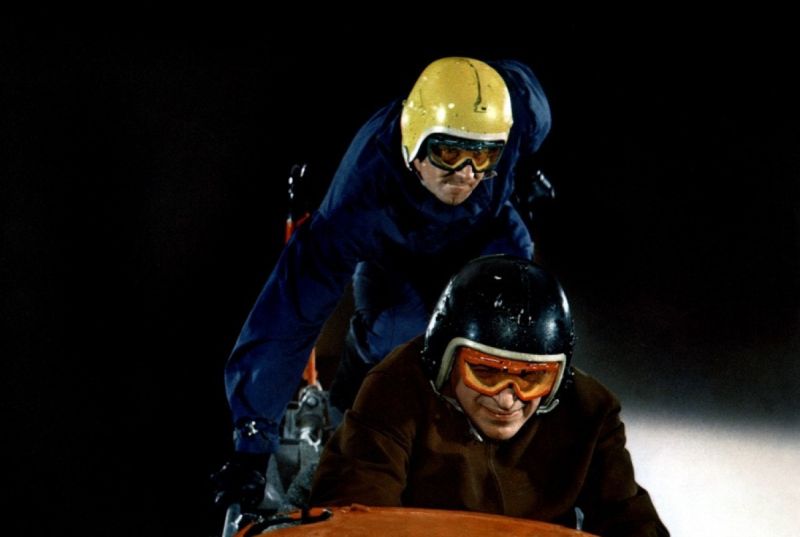 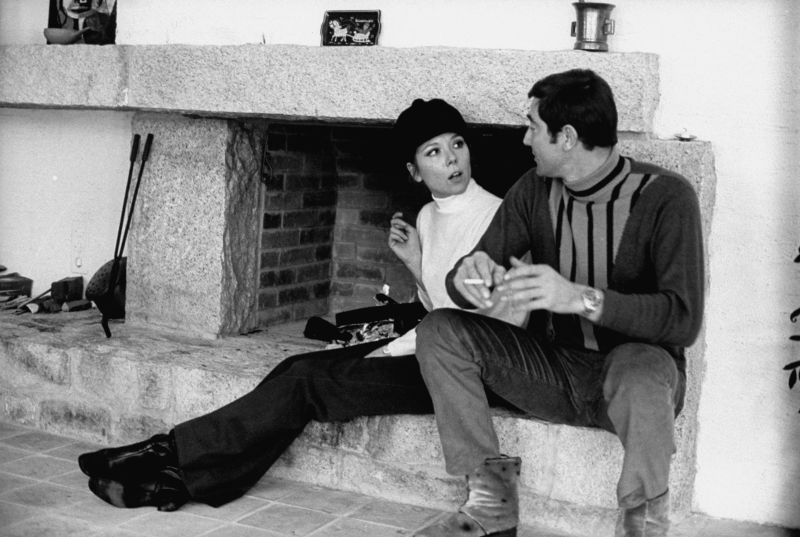 I recently watched On Her Majesty’s Secret Service (1969) for… get this… the first time. How in the world an overly-caffeinated and overly-zealous  film fanatic, film buff, and self-declared film historian like me managed to miss this movie for so long is beyond me. I want to kick myself – especially since I ended up loving it (and George Lazenby and Diana Rigg) so much.

I missed a lot of years I could have been raving about them AND the movie!

What a perfect crock of bologna that George Lazenby (as fine an actor as any, with a killer screen presence) had to follow such an iconic, beloved, and legendary actor in such an iconic, beloved, and legendary role. Truth be told, it’d be my luck – score a GREAT role in a GREAT film with a GREAT co-star… but it involves following a star who is (face and name) synonymous with the role.

I’d have probably had the same response and Mr. Lazenby… “Absolutely, I’ll do it!” But then… “Don’t ever ask me to do it again!”

Sometimes people seem to associate loving an actor or actress in a role with undying loyalty to them and them, alone. Hogwash. You can love as many people in a role as you possibly can. Truth be told – the more, the better. After all, since when is liking more things a bad deal?

Lazenby brought more vulnerability to the role than the other actors and I thought it was wonderful. His take on Bond meshed perfectly with the film, the storyline, and Diana Rigg. Outstanding movie in every way.

If you, too, have somehow never seen On Her Majesty’s Secret Service or haven’t seen it in a while, I hope you’ll watch it as soon as possible. Diana Rigg is now absolutely one of my favorite Bond girls and as for George Lazenby… I can’t think of an actor I like any better in the role. I like a few as well.. but better? Absolutely not.

You can find On Her Majesty’s Secret Service (link to the DVD) on Amazon or watch the movie on Prime Video.