You are here: Home / Archives for Bringing Up Baby 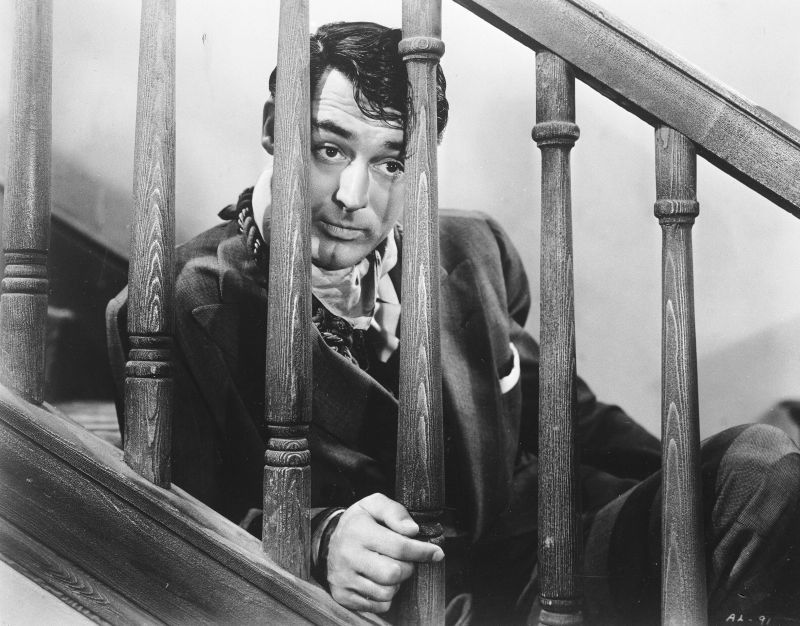 I have a couple of confessions to make that, after experience taught me how wrong I was, humiliate me to say:

My first Cary Grant film was In Name Only and, while I loved (and love) the movie, he wasn’t… shall we say… one of my favorite dramatic actors. In fact,  there were several scenes when I thought, “Why didn’t the director yell CUT and reshoot the scene a little less… well… hammy?!” His acting was, in a few scenes, a little too Garbo for me. HOWEVER, he would go on to become an excellent dramatic actor.

By my second Cary Grant movie, The Philadelphia Story, I could see a huge change in his onscreen demeanor. There was a great confidence and sense of “I belong!” that would stay with him for the rest of his career.

During the time between my second Cary Grant film and my third (Bringing Up Baby), I kept reading about his comedies but I never got excited about seeing him because (in my mind) he was a dramatic actor… sometimes very dramatic lmao!

Fortunately one day Bringing Up Baby was coming on TCM and… because I LOVE Katharine Hepburn… I sat down to watch. Cary Grant… yes… Cary Grant… nearly stole the movie from Hepburn! He was absolutely hilarious and his comedic timing was beautifully natural and on the mark each and every time. Words can’t describe how brilliant the man was with comedy.

Comedy has to be the most difficult thing for an actor/actress to do… and yet this is where he truly shines.

After Bringing Up Baby, I immediately found and watched Arsenic and Old Lace. Again, he blew me away. He was a comedic GENIUS and I honestly felt like I had discovered a whole new actor.

Over the years, I have watched and loved many of his dramas, as well, but let’s make no mistake about it…. comedic Cary is my favorite Cary.

If you’ve never seen Cary Grant’s comedies, I hope you’ll seek them out. Starting with either Arsenic and Old Lace or Bringing Up Baby is highly recommended!

Bringing Up Baby (from the Criterion Collection) is available on dvd or Prime Video.

You can also find Arsenic and Old Lace on dvd (Amazon link) or watch on Prime Video! 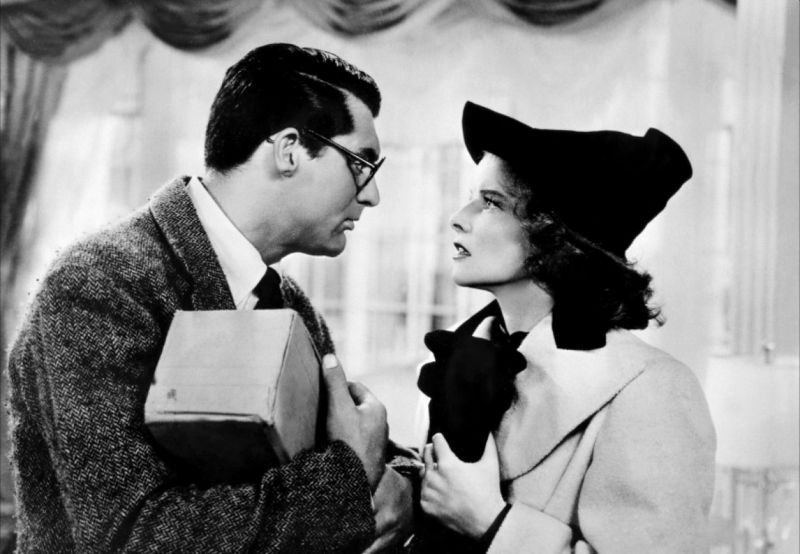 Cary Grant and Katharine Hepburn in Bringing Up Baby 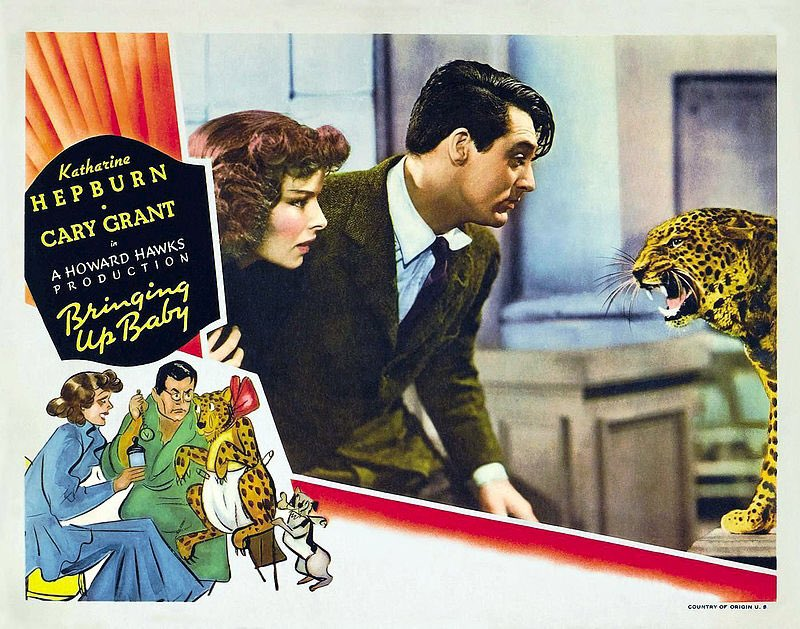 Ever watch a movie and think, “You are perfect in every way!“? Of course you have! I think these very words every time I watch Bringing Up Baby (1938) with Katharine Hepburn and Cary Grant. There’s nothing about this movie I don’t love to distraction. Truth be told, it’s one of those delicious classic old movies that I am completely and utterly obsessed with.

See what I mean? Obsessed.

Those of use who are Old Hollywood enthusiasts (addicts, fanatics… whatever word you use, I’ll answer) have lists we carry around in our heads of movies we recommend to those who aren’t as deep into old movies as we are. Bringing Up Baby is high on my own mental list.

I also keep it in my mental files on lists for people who only think they don’t like Katharine Hepburn or people who don’t think Cary Grant can do screwball comedy.

Heck… get out of here with that… he helped invent it. 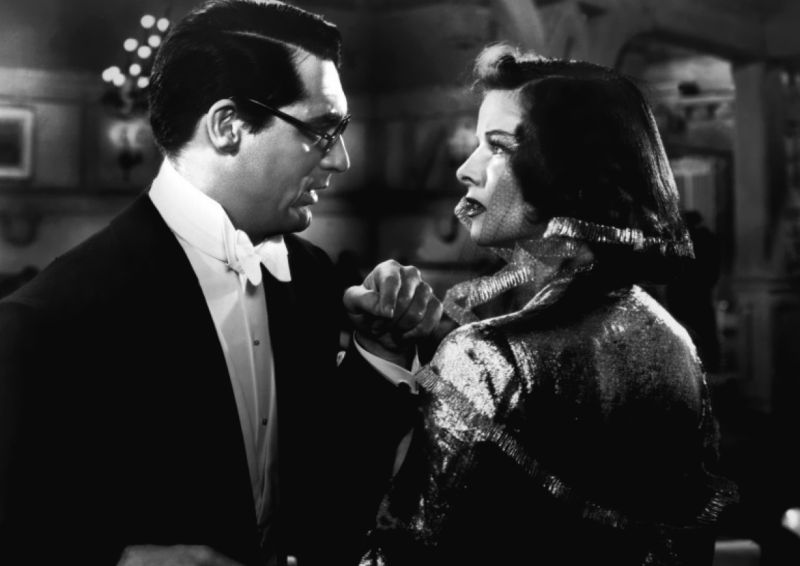 Plot: Katharine Hepburn beautifully (absolutely beautifully) plays Susan, an eccentric heiress who happens to have a pet leopard named Baby. She falls hard (literally a few times) for nerdish paleontologist David – played brilliantly and hilariously by Cary Grant. Problem is, she is making a total mess out of his prim and proper life and he just wants to get away from her.

Or, so he thinks.

Not only is this movie an absolute joy to watch, I’m in love with the fact that the stars, Katharine Hepburn and Cary Grant had such a wonderful time making the film. I’ve read that they enjoyed it so much they’d frequently show up to the set early, just to get started working on their scenes. Some colorful “scenes,” no doubt as entertaining as the movie, carried out during the making of the movie as well!

The following is from the WONDERFUL Katharine Hepburn biography, I Know Where I’m Going by Charlotte Chandler:

“I make an effort to get along with all of my costars, the director, everyone on the set,” Cary Grant told me, “but I did not wish to establish a relationship with Baby.”  He was referring to the leopard in Howard Hawks’ film Bringing Up Baby.

“I felt she might, at some moment, remember the call of her genes that told her she was a wild animal. Or she might like me too much and want to play. I hoped she’d had a good manicure, short claws, but I wasn’t going to be the one to take a close look. Now, Kate was never as worried by Baby. She like to pull her tail, fearless girl that she was, and Baby seemed to enjoy it. Kate didn’t pull very hard.”

“The was I saw my character, Susan,” Kate said, “was, I did anything that came into my heart. There was a great deal of the way I see myself in Susan,” Kate told me.

Ironically, frustratingly, and bewilderingly (pulling out all the stops with the -ly words here, aren’t I?), Bringing Up Baby was a box office bomb. I don’t understand it in the least, but there you have it. Equally {insert all of the previous -ly words here} is the fact that Katharine Hepburn seemed to get the blame! 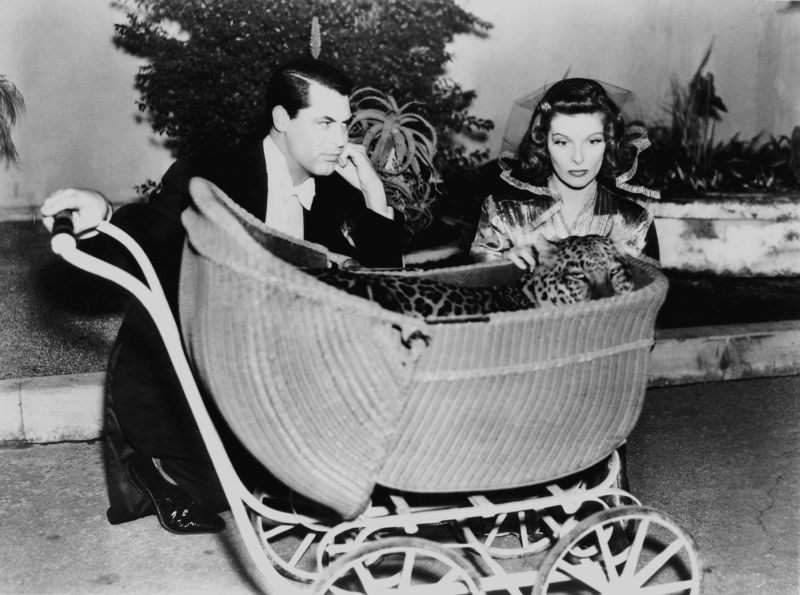 In 1938, the Independent Film Journal published an editorial to the Hollywood studios from the National Theatre Distributors of America. It included a list of stars (wait until you read the names) the writer of the letter, Harry Brandt, called “Box Office Poison.”  The Hollywood studios ridiculously put a lot of stock in this idiocy.

Hahaahahahahahaa. They’re household names, today, and I just had to glance back to see Harry Brandt’s name again, even though I’d typed it mere minutes ago.

When RKO attributed the failure to the “poisonous” Katharine Hepburn’s, they had NO idea how popular and beloved the movie would one day become. This is considered one of the original “screwball comedies” and, for my money, it’s also one of the best.

In addition to phenomenal performances by Katharine Hepburn and Cary Grant, the movie also stars Barry Fitzgerald (although he doesn’t appear onscreen as much as you’d like…. does he ever??), Charles Ruggles, Walter Catlett, Leona Roberts, and May Robson.

“We were both crazy. Bringing Up Baby has always been called a screwball comedy. Well, we were the two screwballs!” ~ Cary Grant

Find Bringing Up Baby on DVD(Amazon link) and add it to your collection today… this is one of those movies that’ll be your “go to” movie when you need a little lift or just feel like escaping with a couple of lovable screwballs. You can also find the movie on Prime Video.