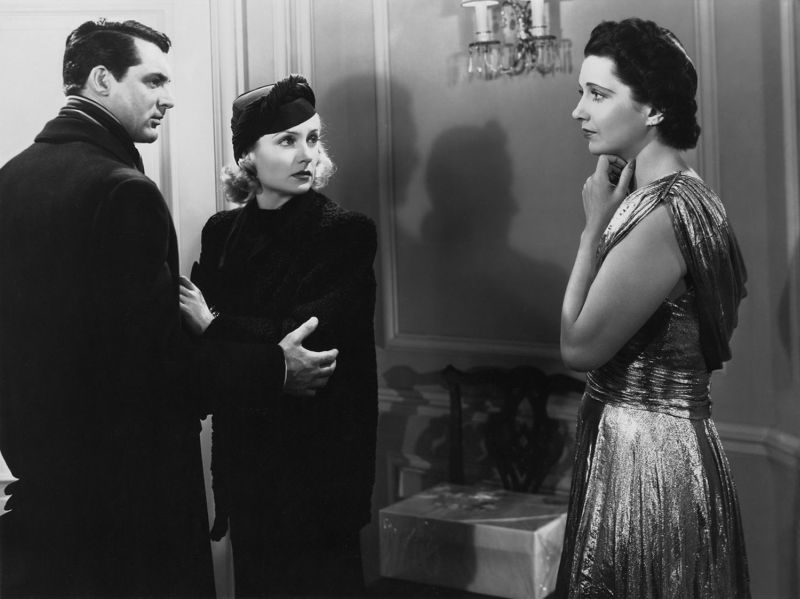 One of my favorite movies is In Name Only (1939, directed by John Cromwell), starring Cary Grant, Carole Lombard, Kay Francis, and Charles Coburn. It’s everything I associate with a great movie:

Carole Lombard gives one of her finest performances in this one and Cary Grant and Kay Francis turn in wonderful performances in their own right. The only drawback of this one for me is the fact that Kay Francis DOES do such a phenomenal job. She is so deviously believable as the vile, selfish Maida that it makes you hate her with a cruel, cold hatred.  After watching this film, I always have to remind myself that there’s a big difference between Kay Francis and the witch she played!

If you’ve never seen In Name Only, I hope you’ll catch it as soon as possible. It’s one of my favorite Cary Grant films and probably my absolute favorite Carole Lombard movie. She truly is breathtaking in this one.

You can watch In Name Only on Prime Video (Amazon link) or buy the dvd on Amazon. 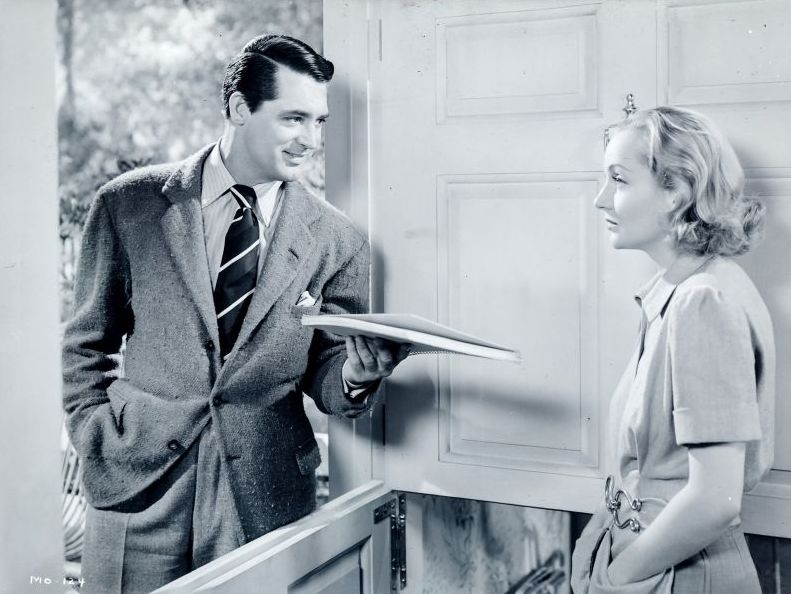 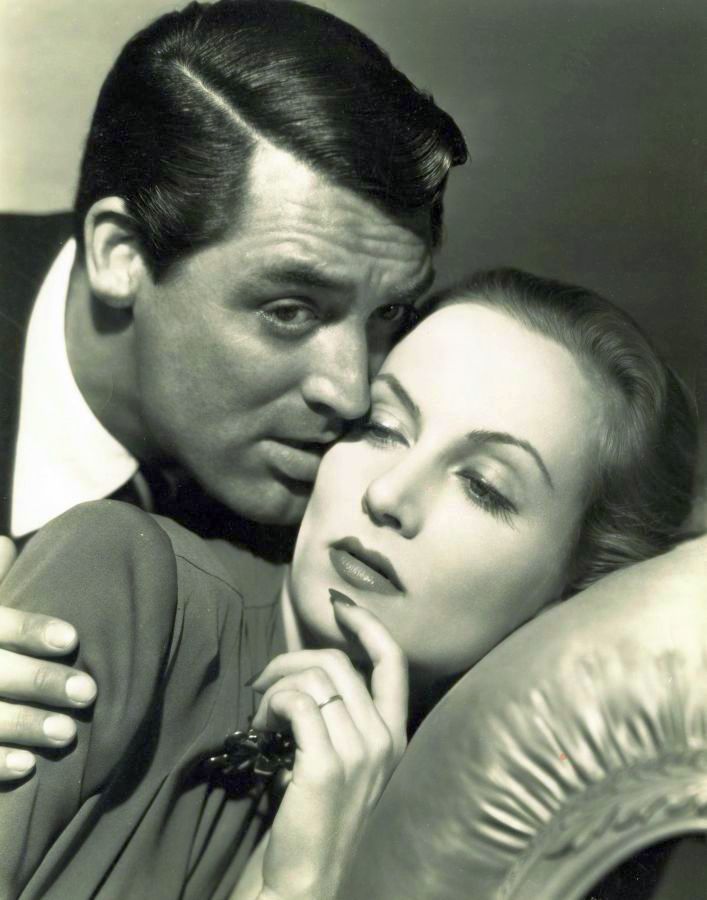 Cary Grant and Carole Lombard, In Name Only

With many actors and actresses, I can’t remember exactly when I fell under their spell. However, with a few, I remember precisely the film and performance that made me vow my undying love to them forevermore.

With Carole Lombard, it was her beautiful, perfect portrayal of Julie Eden in the wonderful 1939 film In Name Only. An amazing cast includes Cary Grant, Charles Coburn, Kay Francis (oh, how detestable she is in this role!!!), Katharine Alexander, and Helen Vinson.

You can find In Name Only (Amazon linnk) on dvd or watch it right away on Prime. I highly recommend this movie… just be sure to fall and fall hard for Carole Lombard. 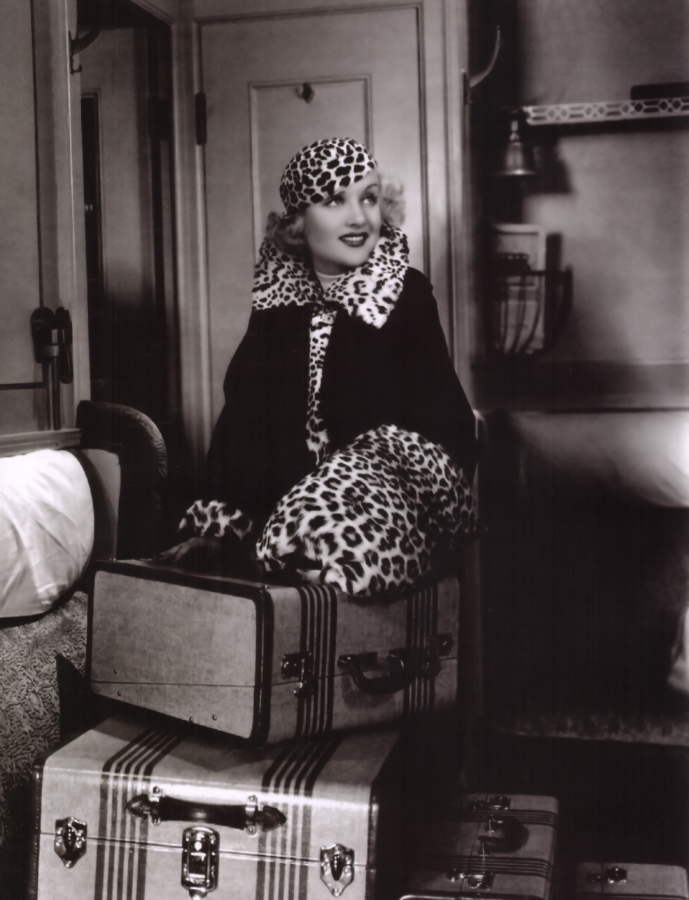 After filming of Twentieth Century (Amazon dvd link) ended, John Barrymore gave Carole Lombard an autographed photo he’d autographed with a tribute she must’ve treasured: “To the finest actress I have worked with, bar none.”

What an absolutely beautiful compliment – and a testament to the professionalism and talent of Carole Lombard. 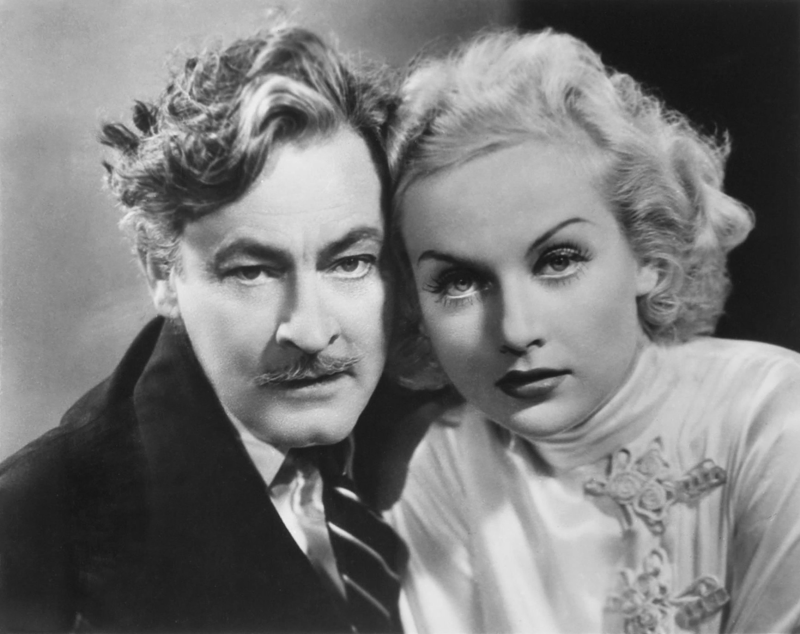 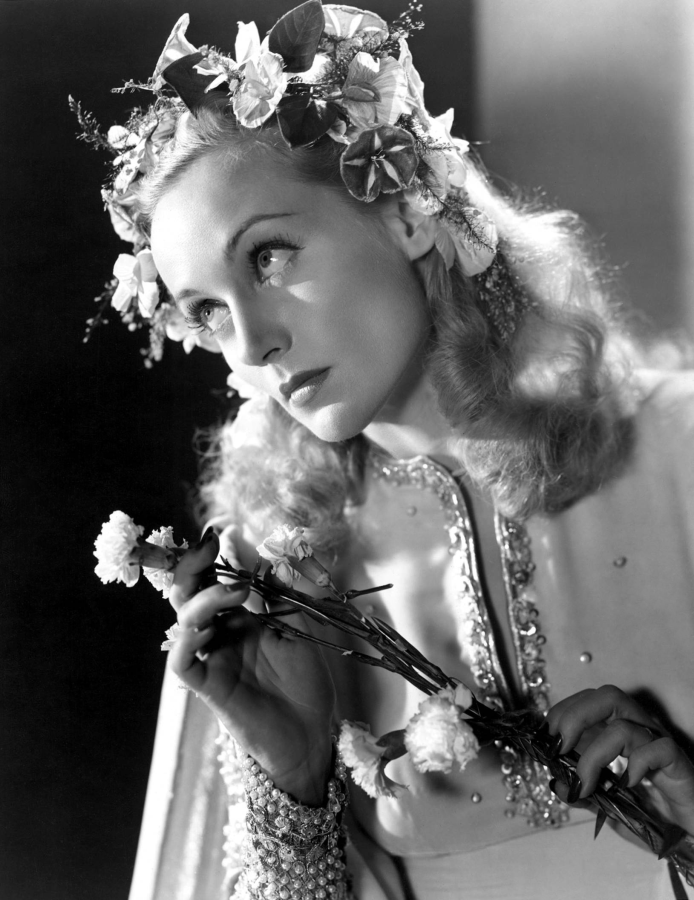 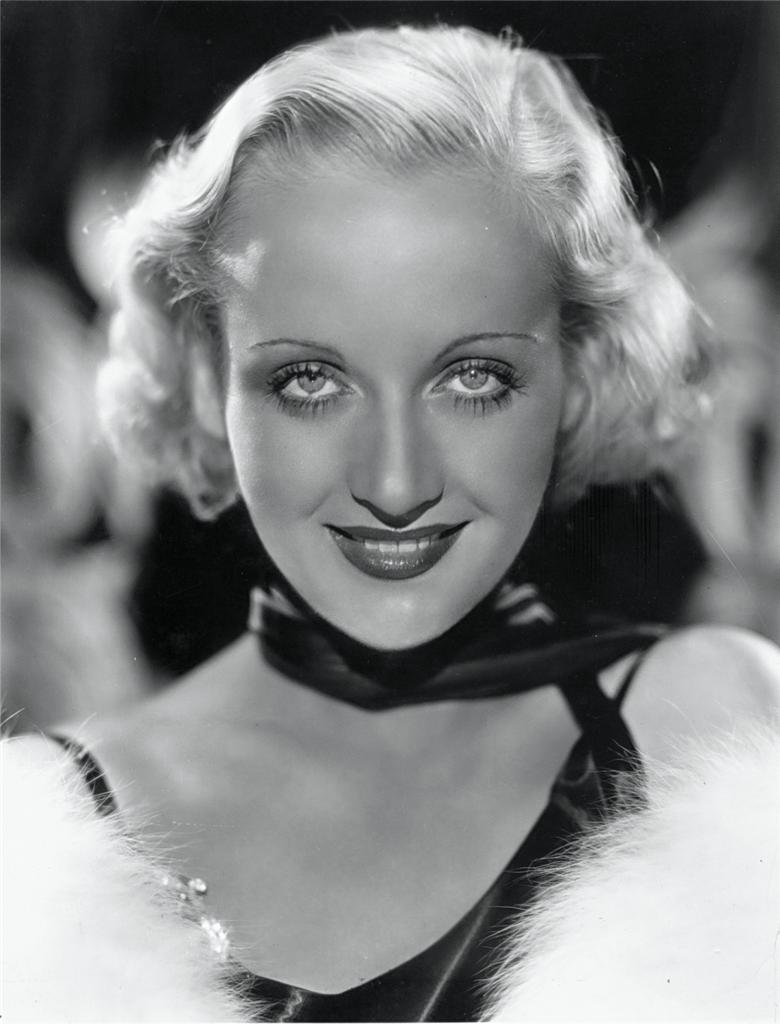 I love reading about old Hollywood actors and actresses. Okay… let’s be honest – I’m completely obsessed with it. Carole Lombard (like Fred Astaire and James Stewart, to name a few) is one of those people who… the more you read about her, the more you like her. She apparently had a huge personality and a wicked sense of humor. She was friends with Lucille Ball, so that shouldn’t surprise us.

Below are a few Fast Facts about the stunning actress, followed by trivia and classic Carole Lombard quotes.

Birth: Carole Lombard was born Jane Alice Peters on October 6, 1908 in Fort Wayne, Indiana. One of her nicknames was actually “The Hoosier Tornado.”  After her parents divorced, Carole moved, with her mother, to the Los Angeles area in 1916. Her first film was A Perfect Crime in 1921 when she was only 12 years old. It would be four more years before she appeared in another film.

In 1926 Carole was seriously injured in an automobile accident. The left side of her face was scarred as a result of the accident.  To LITERALLY add insult to injury, once she had recovered, Fox canceled her contract.

In spite of the accident (and Fox’s rejection), Carole Lombard went on to achieve legendary success as a leading lady.  Gifted with a beautiful voice, she was able to transition from silents to “talkies” – something many stars were unable to do.

In 1931, she was teamed with William Powell in Man of the World. She and the talented actor fell hard for one another and married. Unfortunately, like many things in Hollywood, it didn’t last and they divorced in 1933.

In No Man of Her Own (1932), Carole’s co-star was none other than the wonderful Clark Gable. They hit it off and were married seven years later in 1939. By this time, she was with Paramount Pictures and was one of its biggest stars.

Her last film was in 1942.  She played Maria Tura opposite Jack Benny in To Be or Not to Be. Tragically, the beautiful actress was killed before the movie’s release. The film wrapped in 1941 just as the US entered World War II. Carole went home to Indiana for a war bond rally. On January 16, 1942, Carole, her mother, and 20 other others were flying home California when the plane went down outside of Las Vegas, Nevada.

There were no survivors. Carole Lombard was only 33 years old. THIRTY-THREE.

After her 1926 automobile accident badly cut her face, Carole elected for plastic surgery. At the time, doctors believed that use of anesthetic during the surgery would leave worse scars, so she endured the reconstructive surgery without an anesthetic. Unimaginable!

She was posthumously awarded the Medal of Freedom by President Franklin D. Roosevelt as the first woman killed in the line of duty in World War II.

To Be or Not to Be was in post-production when she died in the plane crash. The producers decided to remove a line where her character asks, “What can happen in a plane?“.

Lucille Ball said she actually agreed to do I Love Lucy when Carole (who had been a close friend) came to her in a dream and recommended she take a chance on television.

Considered by a lot of fans to be the inspiration for the icy blondes in Alfred Hitchcock’s films. (I certainly think she was.)

Carole Lombard’s performance as Maria Tura in To Be or Not to Be is ranked #38 on Premiere magazine’s 100 Greatest Performances of All Time.

Turned down the role of Ellie Andrews in It Happened One Night. Claudette Colbert was then given the role and won a Best Actress Oscar for her performance.

During their honeymoon, Clark Gable and Carole Lombard stayed at the Willows Inn in Palm Springs, California. Not only does the Inn still exist, guests can stay in the same room the legendary couple stayed in, called “The Library Suite.” The room remains largely unaltered since the Gables stayed slept there.

She and Gloria Swanson were close friends.

Both of her husbands (William Powell and Clark Gable) starred in Manhattan Melodrama (1934) with Myrna Loy.

Apparently her mother had had a bad feeling about taking a plane and wanted to take a train to Los Angeles instead. The decision to take the plane was literally decided by the flip of a coin – with Carole “winning” the toss.

Carole had a much-loved little dachshund named Commissioner that reportedly ignored Clark Gable completely. After her death in 1942, however, the dog would not leave his side.

One of my personal favorite stories about Carole Lombard comes from writer Garson Kanin. Apparently Carole never had a dressing room when shooting a movie. Instead, she preferred to socialize with the cast and crew members during her breaks. Words can’t describe how much I love this about her.

“(William Powell) is the only intelligent actor I’ve ever met.”(Explaining why she would not work with Orson Welles) “I can’t win working with Welles. If the picture’s a huge hit, he’ll get the credit and, if it’s a flop, I’ll be blamed.”

“Personally, I resent being tagged ‘glamour girl’. It’s such an absurd, extravagant label. It implies so much that I’m not.”

“A woman has just as much right in this world as a man and can get along in it just as well if she puts her mind to it.”

“I can’t imagine a duller fate than being the best-dressed woman in reality. When I want to do something, I don’t pause to contemplate whether I’m exquisitely gowned. I want to live, not pose!”

“When it comes to your personal life, such as love and romance, girls should take a tip from the men and keep their affairs to themselves. Any man worth his salt regards his private life as his own. To kiss a girl and run and tell would mark him as a cad. Why doesn’t that apply to girls also?”